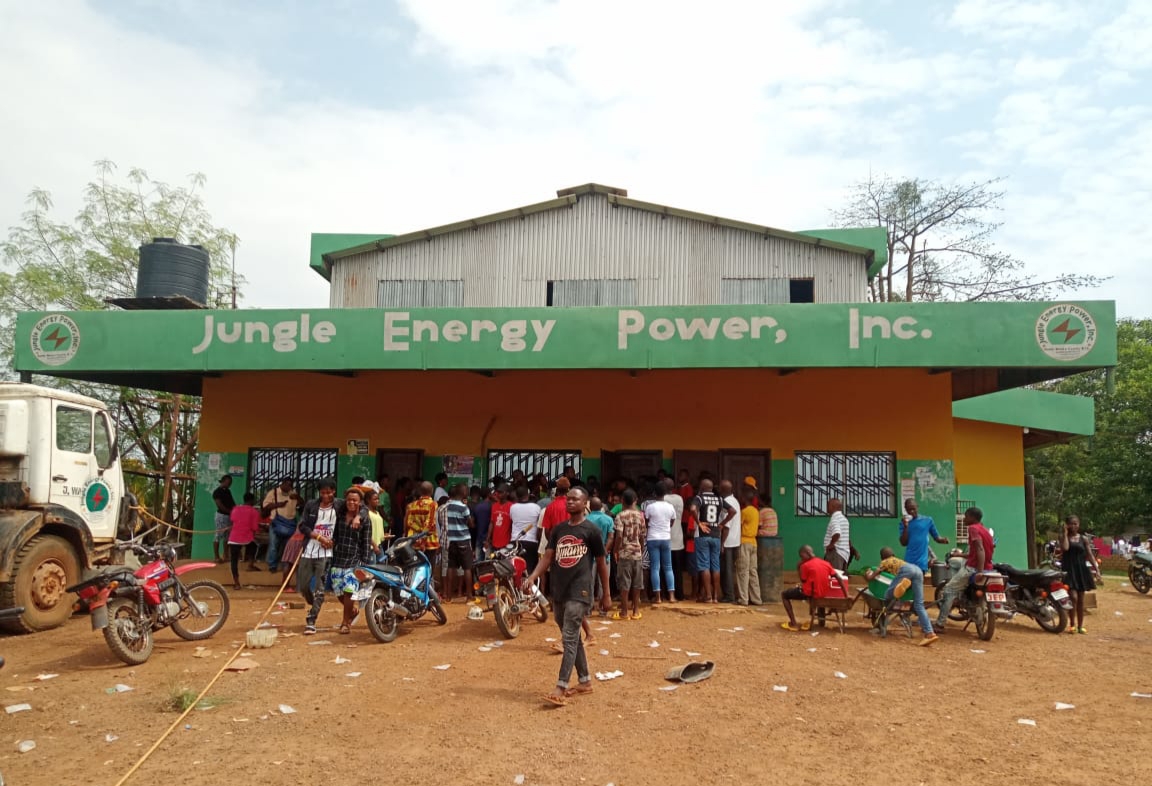 Scores of residents of Sanniquellie, Nimba County were seen gathering in front of the offices of Jungle Energy on Wednesday in anticipating of receiving the free electricity token

Sanniquellie, Nimba County — Residents of Nimba County have lauded the Liberian government for “making true” a promise of providing electricity to them amid the COVID-19 pandemic. The Government had earlier promised a “stimulus package” to vulnerable Liberians after it put in place tight restrictions including a partial lockdown that was meant to curb the spread of the novel Coronavirus.

As part of the stimulus package, the government promised to provide certain supplies of food and subsidized electricity to vulnerable families.

But it has taken several months for the government and its partners to fully implement the food distribution and free electricity token, leaving several community members across the country wary about the impact of the project. The government has argued that logistical constraints and bad roads have stalled the process.

However, in Nimba County it seems the wait is over as scores of people queued on Wednesday, December 16 to receive free electricity tokens from the company managing the national power grid in the county.

Jungle Energy Power, a subsidiary of the Jungle Water Groups of Investments, says over 79KWs worth of electricity tokens will be supplied to residents as part of the government “stimulus package”.

The Jungle Energy Power is a conglomeration of Liberian companies, Jungle Water Groups of Investments. Mr. Bob Marshall-Dolo is the Director for Communications and Public Relations of Jungle Energy Power; he says the “public-private partnership” between his entity and the Government is a demonstration of “fulfilling commitments” to people of the county.

“You know the blessed part of this initiative is that [the] Government is clearing the Goods and Services Tax [GST] so the beneficiaries will receive a little over 79KWs as part of their electricity supply,” he said.

According to Mr. Marshall-Dolo, the supply of electricity will run for one month beginning December 16, and “the company has a responsibility to ensure that every subscriber is served”.

“The upper Nimba grid of the West African Power Poll, which runs from Lorguatuo Port of Entry to Saclepea in Central Nimba County, will ensure that all of our customers are served during this one month,” he explains. “What it means is that subscribers will have to go with their cards to our offices in Saclepea, Ganta and Sanniqellie from the morning hours till the close of business to get their supply”.

On November 16 this year, the Liberia Electricity Corporation announced that it was collaboration with the Ministry of Finance and Development Planning to implementation of a “priority initiative” of President George Manneh Weah, to provide electricity tokens to eligible households.

“All eligible customers will receive the equivalent of US$20.00 energy token for one (1) month on their meter(s). Customers with unmetered connections and registered on the LEC’s database will receive the US$20.00 through the LEC Office during the payment of their monthly bill,” the corporation stated.

Although the government had earlier announced that the free electricity tokens will be given to “eligible” subscribers, Mr. Marshall-Dolo told LocalVoicesLiberia that all residential subscribers will receive.

“The only mandate we have is to give the tokens to residents, irrespective of whether vulnerable or not vulnerable,” he said. “But let it be made clear that only residences will benefit and not business centers which includes hotels, stores, shops, bars, restaurants of faith-based institutions and offices”.

People lining up in a long queue awaiting the electricity token, but many where not seen observing any of the COVID-19 preventive measures including wearing of mask | Photo By: Joseph Solo, Jr.

Meanwhile, some beneficiaries were excited by the announcement from the company as they queued to get served. One of the beneficiaries, Johnson Tougbay praised the government for the support.

“We were not even thinking that such thing will be possible. We thought it was one of those political promises, but see today, we are going to receive US$20 worth of current,” Tougbay said, adding that the free token will provide electricity for he and his family for more than two months.

“When I buy US$10 worth of current, it usually takes me for almost a month, so for this one, I’m sure it will go for more than two months”.

While many beneficiaries are applauding the supply of the free electricity tokens, many others are calling on the government to fast track the distribution of the food package, which includes a 25 kg bag of rice, a bag of beans and a gallon of oil for each family head.

Jemama Teah said since her home was enumerated in September by the Liberia Institute of Statistics and Geo-Information Services (LIGIS) in June, “there has not been anything tangible said about the food distribution”.

“If you promise people, you must fulfill it, that’s one thing the government should understand”, Miss Teah said. “Many of our farmers in urban areas like Ganta, Sanniquellie, Saclepea, Bahn — where there are police officers, could not produce much this farming season because of COVID-19 restrictions. When you are coming from the farm in the evening the police people will run behind you and say you supposed to be in doors.

“So, the farmers did not yield enough this year. Since the government promised us rice, it has been almost a year, but we are not hearing anything about the rice. Let the government bring our rice”.

Like Jemama, Abestie Tozay, a member of the community of people living with disabilities, alarmed that food shortage in his community is at an alarming rate, while stressing the need for the food to be distributed urgently.

“When the government fulfills her promise and start the rice distribution, it will be of a great help to us,” Tozay said. ‘During the enumeration, we made sure all of our members were covered. We are the main ‘vulnerable people’, so let the government hurry up and start this distribution exercise because we are suffering”.

The Ministry of Information, which heads the communication arm of the special committee for the distribution of the COVID-19 Household Food Support Programme (COHFSP) that includes the World Food Programme, could not disclosed when the food distribution will begin in Nimba County. However, there have been growing speculations that the process might start before December 25.