Around The Country: Updates From Four Counties – December 28, 2020

The election in the contested community was cancelled after the Paramount chief confiscated the ballot boxes on lection day | Photo By: Henry Gboluma, Jr.

Several residents of Gbarpolu County are calling on the National Election Commission (NEC) to speed up the investigation into the Nomodatonau electoral violence and announce new date for the re-run in that area. They made the call on a local radio in Gbarpolu on Monday, December 28.

Meanwhile, the NEC has disclosed that investigation is ongoing, and the result will be disclosed while a new date for the re-run will announce to allow 2,021 eligible voters in Nomodatonau town to exercise their franchise.

It can be recalled that polling was disrupted on December 8 after the town paramount chief seized four ballot boxes, alleging that some Sierra Leoneans had crossed over to vote in area, even though those alleged to be foreigners had valid voting cards.

A NEC rerun that was scheduled on Tuesday, December 15, 2020 did not also go ahead due to an upheaval in the area, a situation that prompted NEC to launch an investigation. 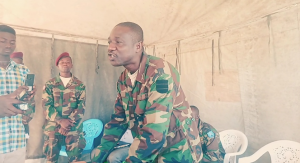 In the wake of tribal tension in Macenta, a community in neighboring Guinea and growing fear of a possible spillover to Lofa County, a backup troop of the Armed Forces of Liberia have touched down in the county.

The troop arrived Sunday, December 27 and have been immediately dispatched to man the borders to restrain or control movements between the two countries.

At least five persons have reportedly died, and several other wounded in a tribal conflict that started on December 27, between the Lorma and Mandingo tribes in Macenta, Republic of Guinea. Macenta is few kilometers drive from Lofa County — where cross border trade between the two countries regularly goes on.

Speaking to LocalVoicesLiberia upon the troop arrival in the county, the Commander of the Armed Forces of Liberia in the county, Lt. Ansu Sheriff, assured the public that the borders will be adequately manned and that citizens should go about their normal businesses in the county.

“Our men have been dispatched at the various borders and I like to assur the citizens when I was taking over, Lofa will always remain peaceful. Citizens should not panic, go about your normal businesses”, he said.

Madam Ylatun (middle) urged people of the county to remain claim and peaceful ahead of the result | Photo By: Regina Juwle

After a tensed electoral process in Grand Kru Count, Superintendent Doris Ylatun has called on citizens to renew the spirit of peace and unity as Liberia joins the world to celebrate the festive season.

Madam Ylatun urged citizens to remain claim and peaceful while awaiting the outcome of the December 8, election in the county.

“As part of enhancing peace in the county, let us look up to National Election Commission to perform their duty,” she said.  “Violence will not solve our problem, attacking NEC and county officials will not help us, let us remain peaceful and forge ahead.

“As we about to enter a brand-new year we will come together as one Grand Kru, with one purpose, that we will remain peaceful and united for growth and development of Grand Kru County.” 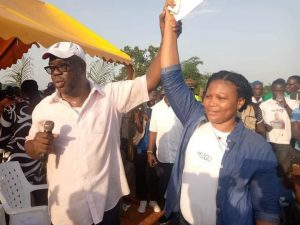 The senator-elect Edwin Snowe of Bomi County has received commendations from people of the county for choosing Madam Finda Alice Gborie Lansanah as his successor.

At an appreciation program held at the Charles Henry Dewey Sports Pitch in Tubmanburg, the outgoing Representative raised the hand of Madam Lansanah and called on the people of Senjeh District to join him to endorse and support her in a pending by-election that will fill the void left behind by his election to the senate.

Kolar Godwin Tisdell is a women empowerment advocate, she says “this is the first of its kind and honorable Snowe has made the difference.”

Perry Nessan, a political observer in the county, says the people of Senjeh should entrust Madam Lansanah with the position because “women leadership is the best”.