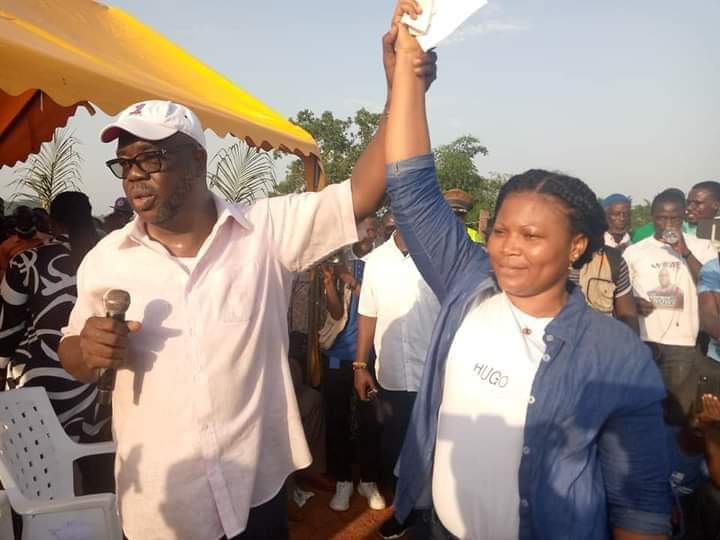 Senjeh District, Bomi County – Independent candidate for the Special Senatorial Elections from Bomi county, Representative Edwin Melvin Snowe Jr. has overwhelmingly won a seat in the Senate following the December 8, 2020 elections. This means that his seat in the House of Representatives will become vacated, prompting rich speculations as to who will replace him.

Days after the official pronouncement by the National Elections Commissioner (NEC), callers into a local radio talk show demonstrated keen interest in only male politicians as possible replacement for Honorable Snowe.

But on December 23, at the Charles Henry Dewey Football Field, senator-elect Edwin Melvin Snowe Jr. raised the arm of Finda Alice Gborie Lansanah, announcing that she is his choice to replace him as Representative. In order to become a Representative in the House, the National Elections Commission (NEC) must organize by-elections in Bomi county, and Finda Alice Gborie Lansanah must meet the conditions to run as a candidate. Voters will decide if she becomes the second-ever Representative from Bomi.

“I want to say the man who died trusting me, the chairman of the Unity Party, the man who was flogged along with his wife in 2014, the man who served this county for nine years as senator, the man whose wife was about to contest in 2017, and when I came in the race, she backed off and supported me. I have come today to give thanks to whom thanks is due. That man, Senator Lahai Gbabye Lansanah, who died believing in me, who died trusting me, who let go his ambition and became my campaign manager. I have come today to tell the people of this county to join hands together to support and endorse for my replacement Madam Finda Alice Gborie Lansanah.”

“The women have long stood by us, and it is time for us to give women the chance to represent the people of Senjeh District.”

Finda Alice Gborie Lansanah is a registered nurse (RN) by profession, and widow of the late Senator Lahai Gbabye Lansanah. During an interaction with her supporters, Lansanah said that she hopes to set an example to encourage more women to run for elected office.

“Running for the position of Representative is not only about Senjeh District, but to raise the status of women in Bomi, and to create leadership ambition in every one of them,” she said

The head of the Tubmanburg Marketing Association, Ma Kumba Barrie, called on the women of Senjeh to support Finda Alice Gborie Lansanah with all their strength.

“I so happy today, my people, that my son Snowe made Finda the one to take his position. All the woman dem in Senjeh try to support Finda and leh we make her be the one to be there for the woman dem. She will be good for other people to see,” said Ma Kumba.

Kolar Godwin Tisdell, a women rights advocate, said that she was impressed with Senator elect Snowe’s decision to promote a woman.

“This is good news for us, women of Bomi County. I strongly believe [Finda] will make a difference at the House of Representatives. This is not the time to criticize your friend woman, because every time one woman is given an opportunity, we should support one another and prove the men wrong.”

Kolar described Honorable Snowe’s decision as the first of its kind in the history of the county.

Perry Nessan, resident of Bomi who follows politics with keen interest, said that Finda Alice Gborie Lansanah has to be trusted. “Women representation is good, and with her, there will be unity and smooth collaborative working relationship.”

Mariama Taylor, a girls’ rights advocate, said that Edwin Melvin Snowe took everyone by surprise. “I never knew that among many educated and qualified men that honorable Snowe has on his team, he will decide to choose sis Finda, it is good for us and I hope this will continue in the 2023 election.”

Sesay is a broadcast journalist based in Tubmanburg, Bomi County (Western Liberia). He works for Pumah Communications Incorporated as news editor. He is also the secretary of Local Voices Liberia Media Network. Sesay reports on a wide range of issues including maternal health, humanitarian issues, land rights, illicit mining and politics. Sesay holds a bachelor degree in Political Science and Education. He has also received several certificates in human rights, health, and development reporting from both local and international media development organizations.