Yaenee District, River Cess County — Scores of women of Sangbalor Administrative District have re-amplified calls to the county administration to complete the construction of what is supposed to be a major health facility for residents of the district.

The construction of the Klagbae Clinic began in late 2008 as a UNDP sponsored project. It is unclear how the project was then transferred to the government of Liberia for funding through the county administration for its completion.

But the clinic project, which is about 20km away from Cestos city and 4km away from the only functional health facility in lower Yarnee District, was expected to ease the burden on locals who must trek several hours to seek medical services. The women are the ones most concerned about the freeze on the project.

Madam Victoria Bai, the community’s women leader, said the absence of a public health facility is causing serious constraints for them when seeking health services.

“Last week one woman had to deliver in the canoe over the Yarnee River while carrying her to the Po-River Medical Clinic on the Pillar of Fire Mission. You think if this clinic was finished this was going to happen?” asks Madam Bai, who is also a Trained Traditional Midwife.

“Every time a woman is in pain, I will have to carry them to the Pillar of Fire Mission to deliver [her] because the government says we should not conduct delivery at home.

“Sometimes, when we are going some of them can give birth on the road, and because we are all women, and we don’t want to be disgrace we will take off our lappa and put it around her until we finish with everything. So, we are begging the government and other NGOs to please help finish this clinic we are tired with the shame”.

Madam Victoria Bai is the community’s women leader and a traditional midwife who often have to travel with pregnant women for miles to delivere them at a health center over 4 kilometers away | Photo By: Aaron Geezay

Also commenting on the challeges, the delayed clinic project is posing for the community, Mr. Edward Fanciah, Township Commissioner of Henryville Township — where the unfinished clinic building stands — expressed dismay in the prolonged delay.

“If it is left with my one let the building be there let animal live inside. We are tired talking,” said an upset Commissioner Fanciah. “Since 2008, this clinic has been under construction and our government officials don’t care to say anything. People are dying instantly because of the lack of health facility in this area”.

Commissioner Edward Fanciah is disappointed that the delay is causeing several constraints for locals | Photo By: Aaron Geezay

“When we heard that the contract to construct the Klagbae and Boe-Geezay health centers was awarded to Monweh Limited, I and former Assistant Superintendent for Development, Kawee Zoegar wrote the Minister of Health at the time, Dr. Peter Coleman, [telling him] that the company could not do the job,” claims Mr. Greene.

“Our agreement was based on a previous record of Monweh Limited with the construction of the County Administrative Building and surely sure since the election of Dr. Coleman as senator of Grand Kru [County], the project died down”.

The former county’s project planner said during the December 8, 2015 county development sitting, US$100,000 was allotted for the completion of the clinic, but only half was made available by the county administration in January 2017.

“So, because Rep. Byron Zahnwea had earlier sent US$40,000 as portion of his Legislative Support Project which was implemented by the Liberia Agency for Community Empowerment (LACE), when the US$50,000 came the contract was given to them to do the completion,” he said, alleging that LACE also abandoned the project before the 2017 elections.

Mr. Andrew Guweh is the Director of the Community Health Department of the Rivercess County Health Team. He claims the abandonment of the clinic project is imposing “serious weight” on the St. Francis Hospital — the only referral hospital in the county.

“The lack of a public health facility in Central and lower Yarnee has a great impact on our healthcare delivery system,” he said.

“Minor cases that could be handled by the clinics are coming to St. Francis Hospital which over burdens our staff. Just imagine, you have people coming from as far as Forteah, the town at the Rivercess and Sinoe border coming to Cestos just for headache or running stomach”.

“Even if we had some challenges along the way that does not mean we don’t want to complete the clinic,” Williams said. “Even with the contractor issue and some administrative issues that led the citizens going to court, it is still our desire whether we go to court or not it’s the county current administration desire to have it completed”. 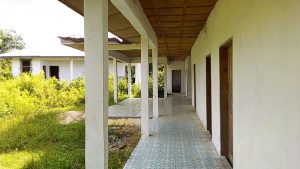 The construction of the Klagbae Clinic began in late 2008 but has since remain incomplete | Photo By: Aaron Geezay

Merlin George is the Secretary General of the Concerned Citizens of Sangbalor Administrative District – the local pressure group that has been pushing for the completion of the project. It filed a lawsuit against the county administration, asking the court to order the administration complete the project.

Although the matter is pending, Mr. George says they are determined to keep pushing.

“Our primary concern is the clinic should be completed but the authority who supposed to ensure that the clinic is completed so that it can provide health services to the people, are not putting in any effort,” he claims.

“The court asked us that we should revisit and give them another 70 working days again because they said they were having materials, the contractor was ready to do the work, and so we all agreed with a written document that the clinic will be completed in 70 working days and that 70 days elapsed on September 2, 2020, and again they have defaulted.”

Amid the protracted delay, Mr. Williams says that county’s Project Management Committee is working with the county administration to “press” the contractor to get the work done.

“Even if it requires that another money be placed there to have it completed, we will differently have to do it,” he said. “So, the completion of that clinic, its operations is the desire of this current local administration”.