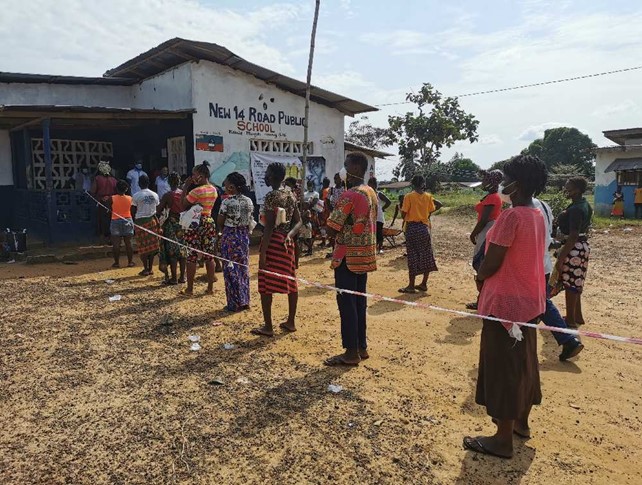 In March 2020, the Government launched the COHFSP to support communities greatly affected by the coronavirus pandemic in Liberia although the process have faced some challenges due to logistical constraints, according to the Steering Committee that also includes the WFP Country Office.

“The COHFSP implementation had experienced delays in the beneficiary registration process approved by the COHFSP Steering Committee, which were largely attributable to documented challenges with identification and verification of the most vulnerable households,” the Committee stated in its recent report.

But following distribution of the food to families in Margibi County in mid-December, several community members of Mabahnkaba District complained about being left out of food distribution process. A lady receives her ration which includes two bags of 25 kg rice, a gallon of oil and a bag of split peas

At one of the Monclay Town distribution sites, Ernest Mitchell, Matue Johnson, and Sylvester McGill were all furious about being left out. They described the food distribution exercise as a “bad raffle draw”.

Ernest Mitchell said, “a lot of vulnerable people were left out” while alleging that some “people who can afford are the ones benefiting”.

“I don’t know how the people did the selection and my community people were all left out, how do we get our food for Karr’s Town?” asked Sylvester McGill.

McGill said when he noticed that his town was left out during the numeration exercise, he reported the incident to the Mbo Statutory District Superintendent, Mr. Charles Karllon.

But Mr. Karlon would say that his office was unaware of the food distribution. The superintendent later assured concerned residents that they all were going to benefit, but his promise proved futile for the aggrieved residents when the food finally arrived.

For Martue Johnson of Monclay Town, the process is “not transparent”, claiming that “some of us cannot afford, but our families were all left out.”

She alleged that another family head received two bags of rice, while questioning why the government is not giving one bag of rice to each family head to allow others receive some of the food. According to the December report of the COHFSP, distribution was successful in four districts of Margibi County — Gibi, Kakata, Firestone and Mamba Kaba districts.

“Distributions in Firestone are expected to be completed during the week of 21 December 2020, while distributions for the remaining communities will be completed by the end of the first week of January,” the Steering Committee’s December report, seen by LocalVoicesLiberia, added.

Patrick B. Fahn, community leader of Monclay Town, disclosed to LocalVoicesLiberia that 622 bags of 25 kg rice, 62 begs of 50kg beans and 350 gallons of vegetables oil were distributed amongst residents of the town.

He said the supervisor of a local organization leading the food distribution had earlier informed residents that only 311 family heads were enlisted to benefit. These family heads were enumerated in Monclay Town, Needonwein, Everyday village, Blotoe town, Needrum, and One-man village, Mr. Fahn said.

In Margibi County, 10,415 household heads are expected to receive the food package but as of December 2020, 556 heads of family received supplies, according to the COHFSP latest report for December.

Meanwhile, some beneficiaries have expressed joy after receiving their ration on December 22 in Mabahn Kaba District.

“Thank God for WFP and the government; my children and I have food for the Christmas,” said a cheerful Garmai Sumo.

Another resident, Jerume Zeamyouway lauded the government for living up to its promise, saying “it is timely once it is food”.

But for Lydia Flomo, although she was happy for the food package, she said “the government should have made provision for all Liberians to benefit,” adding that everyone in the country is affected by the coronavirus pandemic.

Several other residents of Mabahnkaba District including Ernest Mitchell, a resident have called on the relevant authorities to investigate the COVID-19 food distribution to ensure the most vulnerable people, who were left out, get their share of the stimulus package.