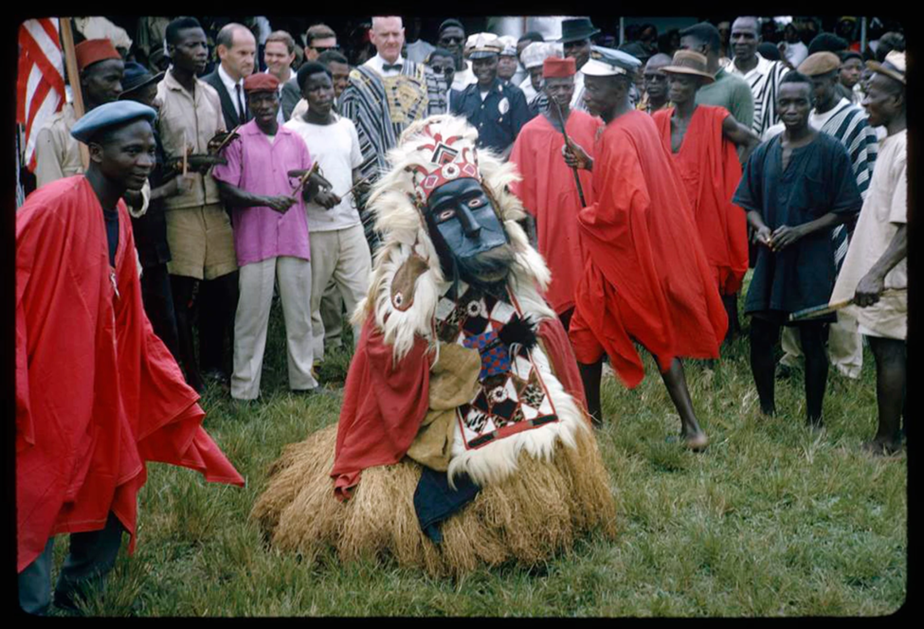 A country devil and his attendants prepare for a procession in Lofa County, Liberia, 1964. Photo Credit: WFAE.org

Gbarpolu county – “Women need to vote. We are in the 21st century.” This is the message the women of Gbarpolu are sending to President Weah, asking him to step up and put an immediate stop to the ongoing violence and threats in Gbarpolu, where a town chief has ordered the country devil to keep women away from voting.

Much of the country has been settled in the vote count following the December 8, 2020 Special Senatorial Elections (SSE) and the National Referendum, but that is not the case in Gbarpolu.

Here, women are scared to death after the town chief of Nomodatonau stole the ballot boxes at four polling places, and then ordered the country devil out in the streets to scare the women away. The women supporting the leading female candidate are now asking the intervention of Liberia’s President, George Weah, self-proclaimed warrior for the rights and equality of women to prohibit the country devil and allow for peaceful elections.

The feminist-in-chief is called to keep his word

There were nine candidates for the Senate seat on behalf of Gbarpolu county on December 8, 2020, but only one was female. Independent candidate, Botoe Kanneh, went into the challenge with a sense of confidence, and that showed in the partial vote count released by the NEC. She leads with 4,767 of the votes, representing 25.79% against Alfred Gayflor Koiwood, of the leading Coalition for Democratic Change (CDC) party, that received 4,281 of the votes representing 23.16%.

But four out of 144 polling places have not submitted their votes, and that is because on election day, the town chief of Nomodatonau confiscated all of the ballot boxes from four polling places and ordered the “Poro Master,” or leader of the Poro secret society, also known as the “country devil” to get out on the streets and scare all the women out.

So now women are calling on President Weah to step in, restore order, and organize the elections in the remaining four polling stations.

According to a statement published on Liberia’s presidential website, in October 2018 President Weah stated that “I wish to declare myself as “Liberia’s feminist-in-chief, and hereby pledge to the women of Liberia that I will do all that I can, during my tenure as president of this country, to fight for gender equality and empowerment.”

Old tradition to scare the women

According to deeply respected tradition, whenever the male “devil” comes to the town, women, males and children who are non-members of the Poro secret society are forced to hide themselves away or else they may face great evils upon themselves and their family.

“Once you put the country devil outside, that means the women and other non-members will not be able to participate in the elections,” said Fatu F. Jalloh, Executive Director of Yapugeanma Women Inc., a community-based women’s organization. “The women of Gbarpolu were thrilled to see one of theirs becoming senator of the county for the first time,” Jalloh said, “but the town chief’s unconscionable actions have become a threat to the Liberian women’s political participation, and needs to be addressed urgently.”

“As a born citizen of Gbarpolu, I understand how the people respect traditional culture,” Jalloh said, fearing that if elections were to be organized, women would not come out to vote as long as the county devil is patrolling the streets.

“If a young woman sees the devil, they will curse her and she cannot have children, or if they feel challenged by a particular person, they will make you go insane so they should not be brought in public to create problem for other people,” Jalloh said.

Jalloh called for laws that will prohibit the country devil from patrolling the streets during an election, to allow women to freely vote.

She also urged President Weah to make a statement on the current issue threatening the lives of women in Gbarpolu. “President Weah needs to tell the traditional people that women participation is key in every election,” Jalloh said.

Marayah Fyneah, Coordinator for Liberian Women National Political Forum, said that even though the NEC has yet to announce, again, a date for the election re-run, the women feel that Kanneh is the winner.

“Elections and political participation have no time for the country devil. If that is why they are trying to scare the woman away with country devil, they should be able to find another way out, but we are awaiting the NEC to come out with a date or declare Madam Kanneh the winner of the elections because she will win if the process is to be held today.”

She urged the NEC and government officials to speedily investigate the violence and organize the election in the presence of increased numbers of international observes and law enforcement.

“Women need to vote. We are in the 21st century, this is not a time for the country devil,” Fyneah said.

“There should be no re-run. Madam Kanneh should just be pronounced the senator of that county. Because where in this world you will see country devil coming outside during the electoral process?” Tradition and culture, she said, pose a serious threat to women’s political participation, adding that candidate Botoe Kanneh’s supporters were intimidated and escaped from Nomodatonau town, making it impossible to carry out the electoral process without them.

“So, if you carry an election in that town, who will vote?” she asked rhetorically.

Victoria T. Koiquah, a women’s advocate, urged President Weah to show respect to women and stop the violence in Gbarpolu. “It is clear that Nomodatonau’s electoral process is not safe for madam Kanneh and her supporters. The result should be announced in favor of her, or NEC should ensure that the town is violence-free before the election is held.”

Koiquah said that the threat with the country devil is extremely serious. Herself, as a member of the Sanda secret society would have to respect any orders from higher ups, and she understands that members of the Poro will do anything that the Poro master asks them to. “Such is the threat to Madam Kanneh.”

“However, we need to stand up against some of these things. This is why, as a traditional person who likes the traditional way, I will say let us remove the harmful parts and take the country devil out of electoral processes.”

“I am asking the feminist-in-chief’ to wake up and protect the right of a female candidate because to make this clear, we will not play with our Gbarpolu votes. Once the NEC confirmed a new date for the election, we will be in Nomodatonau and this time around, we will challenge the country devil,” she warned.