Around The Country: Updates From Five Counties – January 5, 2021 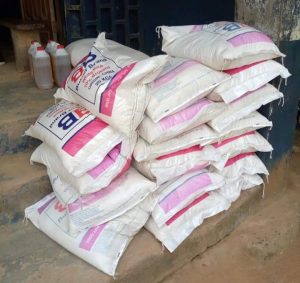 Officers of the Liberia National Police in Tubmanburg have arrested several persons including a staff of the City Corporation for allegedly stealing over 100 bags of 25kg rice.

The rice was allegedly stolen at the beginning of the government’s ‘stimulus package’ food distribution in the county on Friday January 1. Col. Gustine Hallie, commander of the LNP in the county, told LocalVoicesLiberia that those involved will be charged and sent to court.

“We will make sure that all those involved in this rice case will be sent to court. I don’t care whether someone will say am siding or not,” Col. Hallie said.

Varney Mackever, who works for the Tubmanburg City Corporation, is one of those undergoing police investigation. He argues that the rice was to cover compensation for the work with the WFP.

“We were made to do enumeration and WFP didn’t pay us so this is the only way we can get something,” MacKever said.

Meanwhile, the food distribution has sparked mixed feelings amongst people of the county with some describing it as “fraudulent and political”.

In other news, Bomi County Health Team has finally re-opened the doors of Yomo Town clinic to resume provision of basic healthcare services to residents of the area.

The new Officer in Charge (OIC) of the clinic, Ms. Komassa Sorsor said, “the people have been crying for this clinic to reopen doing so in the midst of the slowdown of COVID-19 pandemic restrictions is a great move.”

In order to enhance services at the clinic, healthcare providers at the clinic received several trainings to ensure strict adherence to COVID-19 prevention and control mechanism.

Yomo Town clinic, which serves 16 catchment communities with a population of over 1,000 residents, was temporarily closed on June 30, 2020 after the then OIC contracted COVID-19.

Residents have lauded the resumption of services at the hospital with some saying that they would not have to travel several miles to seek medical services.

Health workers blocked the main entrance of the facility housing the County Health Team in demand for their salaries | Photo By: Regina Juwle

According to the head of the aggrieved health workers, Josephine Karboi the Ministry of Health has promised to provide the balance six months before the end of the January.

“From our protest that day, the pressure we put on the County Health Team, UNCEIF was able to give us only three months, and they appealed to give the balance to us by the end of this month,” she said.

She indicated that the three months’ salary was made available through the efforts of the Grand Kru County Health Team through several communications from the County Health Officer, Dr J. Woyee Wreh to the Ministry of Health.

Ms. Karbai commended the County Health Team for the “quick intervention” into their salary issue.

“My team and I are still awaiting UNCEIF to give us our balance by the end of this month, if we don’t receive any signal from them we will staged another protest until our pay is completed,” she warned. 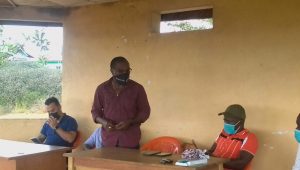 Dr. Francis Ketah, Liberia’s Chief Medical Officer has announced that the county will have a new health facility constructed in 14 months. He made the disclosure recently during a county stakeholder meeting in Bopolu City. The construction is expected to kick off in the mid-January 2021.

Dr. Ketah said, “It saddens me when I go from county-to-county, I see the health facility that cannot provide quality care for our people.”

“This is through the advocacy of our President’s partners. And as a matter of fact, we have signed a contract to build one of the best referral health facility in this part of Liberia — nothing less than a 100-bed facility is expected here beginning January 2021.”

During a day assessment visit in Bopolu City, which was led by Dr. Ketah in March 2019, the county authority made available 12 acres for the hospital project, which is expected to be completed in 14-months.

Officials of the county administration have pledged their full support to the project, promising to do everything possible to ensure the project is a success. 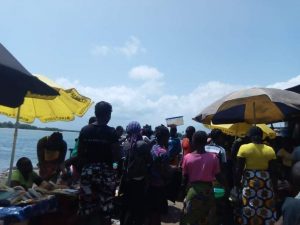 Many marketers also do not follow the social distancing or wearing of mask protocol when they gathered in market places across Harper | Photo By: Bryan Dioh

A recent regulation introduced by the Ministry of Health for travelers leaving the country is not being enforced in the county, prompting concerns amongst residents that they are being expose to resurgence of the coronavirus pandemic.

The Ministry announced on December 1, 2020 that the purpose of the regulation is to protect Liberia from the further spread of Covid-19.

“All non-exempt incoming and outgoing travelers will be tested for Covid-19. The testing fee is US$75,” the release stated. “Upon arrival, exempt travelers must present a negative PCR Covid-19 result from an accredited lab within 96 hours of testing”.

But this regulation is yet to be introduced in Maryland County, which has several porous borders with the Republic of Ivory Coast – where business travelers used to move between both countries unimpeded.

Dr. Methodust George, Maryland County Health Officer, said the testing of people who might want to travel outside the county will begin shortly.

“We haven’t even started the issuing of the certificate because of other reasons but we hope to start soon as our people need to be safe,” Dr. George said. “Even increasing community awareness is another thing we have to look at because everyone seems to be forgetting about this health measures implementation and with all of us collective efforts, we should stand strong to help defeat this.”

The CHO is also concerned about the ramifications of the increasing violation of the coronavirus health measures during the election and holiday periods.

A little over US$197,000 was spent to built health facility in Belefanai, Zota District, according to the county health team | Photo By: Emmanuel Mafaleh

Liberia’s Health Minister, Dr. Wilhelmina Jallah, has praised the people of Bong County for the resilience demonstrated in the fight against COVID-19.

Min. Jallah said that she is proud of the county authorities especially the County Health Team headed by its Administrator, Jonah N. Togbah for leading the county’s response against the pandemic.

The Liberia’s Health Minister then reminded people of the county to “bear in mind that COVID-19 is not yet eradicated”, while urging all citizens to keep observing health protocols. She was speaking at the dedication of a new health facility in Belefanai, Zota District. The health center is worth a little over US$197,000.

Dr. Jallah described the facility as a “big boost for the health sector in the County”.

Said Min. Jallah: “Today to have such a center in this district where many people can come from various towns and villages and be able to have access to emergency surgery is important for the Ministry of Health and our people.

“As a government, we are doing all we can to make the health sector of our country better, but we needs the support of all of you”.