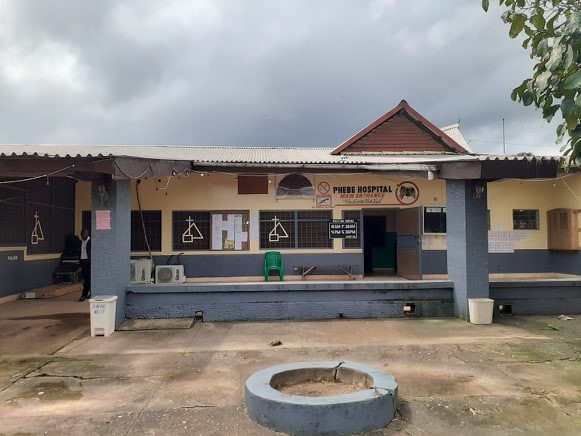 Bong County – The health of  thousands of Liberians may be in jeopardy, as tension continues  over the control of Phebe Hospital in Suakoko, Bong County – the major referral health facility in central Liberia.

Th Ministry of Health is claiming that the Hospital’s Board is amassing too much power unto itself in the running of the health facility although government provides over US$1 million annual budgetary allotment. But the Hospital board insists it will not give the Ministry more power than what the is required by the by-laws of the institution. 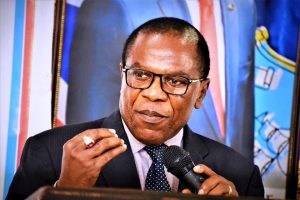 Dr. Kateh is pushing for the Ministry of Health to have a say in the day-to-day running of the hospital

Currently, the Ministry of Health through the office of the Chief Medical Officer, Dr. Francis Kateh, insists that the government should have a stake in the daily operations of the hospital, even though the government is fully represented on the board – the highest decision-making body.

On November 12, 2020, the Chief Medical Officer confirmed the withdrawal and reassignment of three government-employed doctors from Phebe Hospital, citing the hospital management’s refusal to allow the government have a say in the running of institution.

“Letters re-assigning some doctors from Phebe Hospital were signed by me and definitely they have been reposted to other facilities,” Dr. Kateh said in an interview with Super Bongese Radio, a community radio station in Gbarnga.

He added that the government provides more than 95% of the running cost and personnel of the Hospital, as such it must have a stake in the operations of Phebe Hospital. He warned that if the churches will run the hospital the way they please, government would rather withdraw her support and empower public health facilities.

He noted, “If you are investing into an institution and you have no say in that institution, you have to begin to rethink. And so, we are in the process of rethinking.”

Considering the annual budgetary allocation to the hospital, Rep. Cole has often called for the Management of the Hospital to state whether the Hospital is private or public. The Lawmaker has also questioned the grant and subsidy policy of the government, which according to him, prohibits private institution from receiving more budgetary allocation through the national budget than public institutions.

“We have struggled for the past six to seven months to establish whether Phebe is public or it’s private,” Rep Cole said in a recent interview. “Phebe has always gotten money under the disguise of being a public institution and people in the institution squander the money in the name of people can’t dictate to them — they are private institution.

“Phebe budget must be reduced to US$1 million, the balance 500,000 [should] be given to other hospitals in the Republic of Liberia more especially in Bong County.”

He argues that the Hospital sells IV fluid and oxygen to patients; and as such it should use the proceeds to cover some of its costs, thereby allowing the government to adequately cater to the needs of other health facilities in the county.

These critical views from Dr. Kateh and the Bong County lawmaker have been greeted with strong resistance from the board of the hospital.

The board claims that the government has a voice in Phebe, as it is fully represented on the Board by the Ministry of Health and the County Superintendent as required by the laws governing the institution.

Article II, Section 2.11 of the by-laws and constitution of Phebe Hospital and School of Nursing states that “this corporation shall be composed of a Board of Trustees, hereinafter called “Board of seventeen members,” designated as follows: section 2.111: three members representing the Ministry of Health, one being the County Medical Director, two members each representing the Lutheran Church, the United Methodist Church, the Episcopal Church, one member, who is the County Superintendent,” amongst others.

However, decisions reached at the level of the Board is based on consensus, according to Article II section 2.12, which states “that the board, by a majority vote of all members, may declare a membership seat vacant, when the member has been absent without notification from two consecutive meetings of the board.”

And Article VII, Section 8.1 adds “that a quorum, necessary for the conduct of regular business at any called meeting shall be six members.”

Mr. Tornorlah Varpilah, who is the Chair of the Board, claims that the “hullabaloos at the Hospital is based on policy disagreement” amongst certain members of the Board.

“We have policy disagreement, not with the government of Liberia, but with certain individuals; Dr. Kateh, Honorable Cole, and the other two have not come at the front,” said Varpilah.

He said in July 2019, Dr. Kateh attempted appointing four persons to the Hospital, through the Health Minister, Dr. Wilhelmina S. Jallah, after the hospital’s board suspended four of its employees, who were at the center of an audit that was conducted by the Internal Audit Agency.

According to letters seen by this reporter, Minister Jallah later withdrew the recommendations after understanding that her action violated the hospital policy. 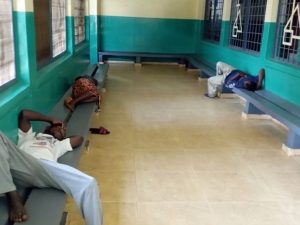 Patients lying waiting to be attended to by health workers at the Phebe Hospital in Bong County | Photo By: Emmanuel Ballah

Amid the spat over control of the hospital and the already enormous challenges the health facility faces during this global coronavirus pandemic, there are growing concerns that the hospital may struggle to adequately serve the county.

Limited or no essential drugs, medical materials like hand gloves have been some of the challenges the hospital has faced since the outbreak of COVID-19.

Some residents term the wrangling as a “deathtrap” as they worried that it could cripple the health system of the county.

James Saybay, a prominent citizen of Bong County, said, “We are already suffering; the hospital cannot even respond fully to our health needs, then people fighting for voice or [want to] reduce the hospital’s budget. They just want to kill us!”

He continued: “Electricity is a major problem, at Phebe, current comes on only night, why if you have a critical case in the day? It’s a problem. The government and Phebe need to think about the poor people and settle their differences at once.”

For Korto Mulbah, who is catering for her ailing sister at the Hospital, she has not seen a doctor attending to her sister.

“Since we came, they keep saying the doctor coming to see us but we can’t see the doctor two days now only the nurses,” she said. “I just came from buying Paracetamol and ASA in Gbarnga. They gave me the paper to go buy the medicine. Even current, only in the night… the government really needs to think about us the poor people and feel for us.”