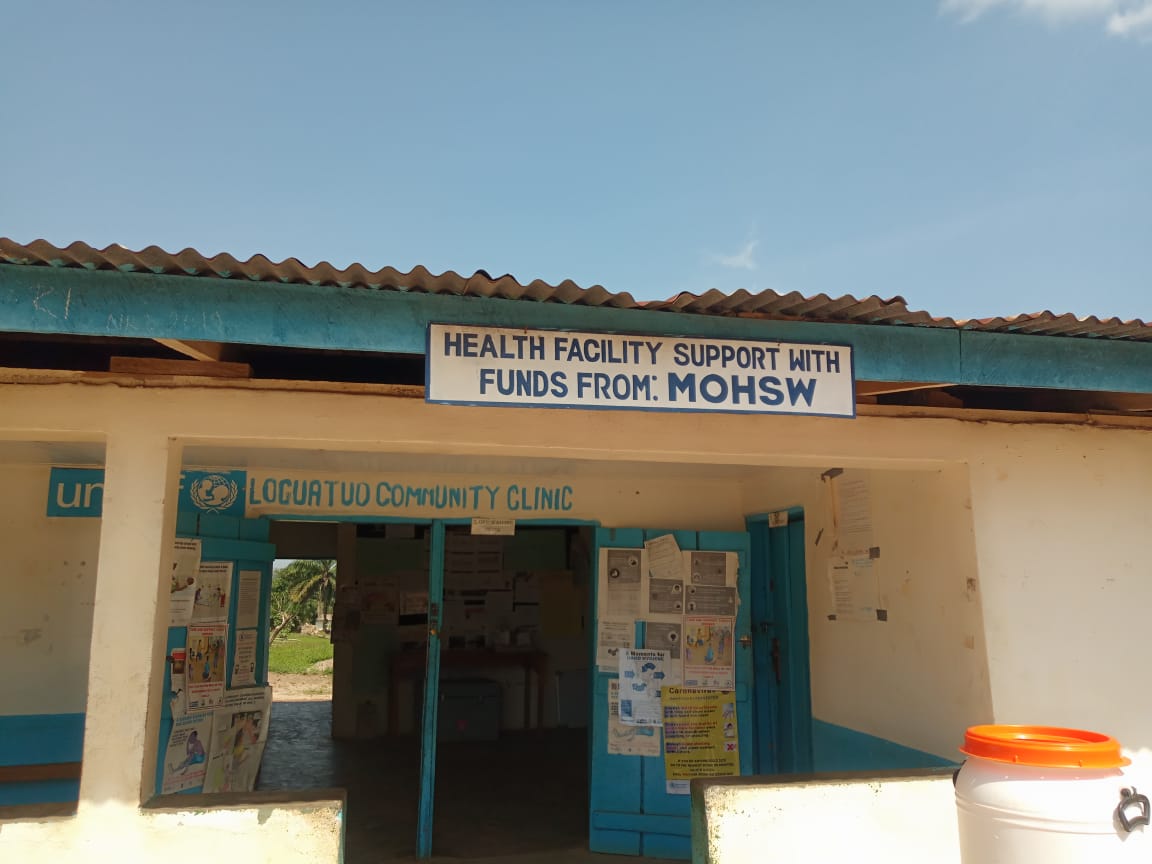 Nimba County – Residents of catchment communities of Loguatuo Community Clinic appear to be renewing their confidence in the local health facility as confirmed cases of COVID-19 decline in Nimba County.

Located in the Gbehlaygeh Health District of Nimba County, Loguatuo Clinic is close to the Liberia-Ivory Coast border – this means, it is the only health facility in the area that caters to travelers from the neighboring West African nation.

Mr. Austin Belleh Benson is the Registrar of the clinic; he says the facility is experiencing a shape influx  in patients from the various catchment communities including communities in Ivory Coast.

He recalls that there was sharp decline in the number of patients that attended the facility during the height of the coronavirus pandemic in Liberia, which began in March 2020.

“When the Liberian Government started the lockdown and Nimba County started reporting cases, people were afraid to come to the facility,” said Benson, who added that health workers conducted survey to ascertain the reason for the decline in patients. “When we asked about the low patient load, they said didn’t want to come to the facility to be tested for the coronavirus disease.”

So far, Nimba County has recorded the third highest number of confirmed COVID-19 cases with 67 – out of which 56 recovered and 11 persons died. Misinformation and rumors about COVID-19 had earlier prompted many communities to deny the existence of the virus was in the county, prompting health workers to increase community awareness to curb the growing infodemic.

Now that the number of confirmed cases has declined in the past three months, Mr. Benson said the “patient load has increased once more” at the facility as community members begin showing confidence in the health system. He said “the patient’s influx has taken a dramatic upwards turn, something that has not happened in more than 10 years”.

The Loguatuo Community Clinic has 14 catchment communities with about 8,444 residents, many of whom seek health services at the clinic. But when the number of confirmed cases began declining couple with the arrival of refugees from Ivory Coast, the clinic became overwhelmed.

“For example, we have over 1,000 refugees in Kpantiaplay township alone. Not to talk of other communities that the clinic serves,” the clinic’s register said. “Not just that, Ivorians who are not seeking refuge in Liberia always crossover to Liberia to seek treatment at our facility. This is causing drain on our drugs supply.”

In an interview with LocalVoicesLiberia, Mr. Aaron Glay, the Gbehlaygeh Health District officer, confirmed that community members are regaining faith in the health facility.

Glay said the progress sprung out of the “numerous Health Facilities Development Committee (HFDC) meetings” involving community members and stakeholders of the sector.

The HFDC meetings are regularly held every month to strengthen community-facility relations between health workers and the people of the various communities, he said.

“It brings together the facility health workers, the office of the DHO, personalities from the County Health Team (CHT), local government and ordinary community representatives”, DHO Glay explained, noting that it is at those meetings that health talks are given in a way that trust and faith in heath facilities are reignited.

For Isaac Cole, Nimba County Surveillance Officer, he attributes the gains to the “proper health coordination” amongst health workers and community health volunteers, who have since embarked on a massive awareness in communities.

“Thank God the COVID-19 situation is not like the Ebola outbreak when community people used to chase after health workers,” he said. “This time, people listen to us and the meetings are really helping us. The participants carrying our messages on the radio and we usually have community focus group discussions. And these are really working”. The Loguatuo Community Clinic has 14 catchment communities with about 8,444 residents and communities across the border in Ivory Coast | Photo By: Joseph Solo, Jr.

As the number of patients increases at the clinic, there seem to be a looming problem that may undercut the confidence of community members once again. Drug shortage is a looming concern for the administration of the hospital.

“Right now, we even send patients with prescriptions to buy drugs out of the facility because we don’t have drugs,” explains Mr. Benson, Registrar of the Loguatuo Community Clinic

He named essential malaria and typhoid drugs that are low on stock, and added that “antibiotics, fungus medication, Metro infusion and fluids as some of the other essential drugs the facility lacks”.

“The Ministry [of Health] regularly supplies us drugs but the quantity has not always been enough to serve the population we have to contend with,” he said, calling on the Ministry and partners to make speedy interventions.

Commenting on drug shortage at the facility, the County Health Surveillance Officer said because the health facility also serves people from Ivory Coast, supply of drugs quickly runs out.

“Even recently we sent a consignment of drugs to that facility, but the problem has been the Ivorians who reside in Ivory Coast but attend the health facility in Loguatuo and the Ivorian refugees always inflict the anticipated number of people to benefit the drug supply,” Mr. Cole said.

Grand Bassa County Records Over 41,600 Malaria Cases in 2020
Some Residents Worried They May Not Receive Covid-19 Food ‘Stimulus Package’