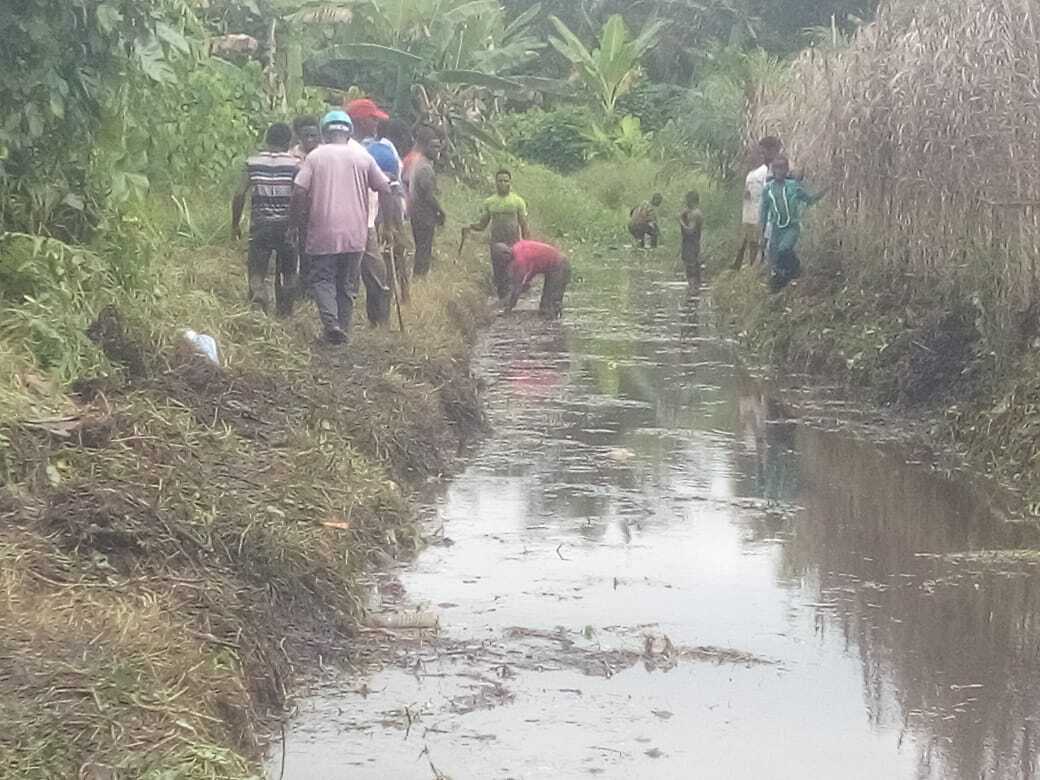 Harper, Maryland County – Residents of Airfield Community in Harper have launched a campaign to clean and repair major drainages by using manual tools.

The two major drainages connect the community with central Harper and the Harper general market. Several youths, including students also joined the campaign intended to limit the health risk the uncleaned drainages pose to residents.

Airfield community, which is within the Johnsonville Township outside Harper city, began to expand in early 2003 and currently host thousands of residents including students at the William V.S Tubman University.

Maryland Avenue, which connects the community with the city center and Tubman University, is a major route used by marketers, students, and workers. But it has been in a deplorable state for several years.

Debora Y. Nyepee, chairperson of the cleaning campaign, said the project is a self-help initiative, with “little support” from Caritas Cape Palmas through its “Building Resonance Integrated Community Engagement Program” that began because of failures of the local authority to maintain the drainage.

Mrs. Nyepee told LocalVoicesLiberia following the completion of the exercise that on many occasions the community leaders have engaged the county authority to open-up the drainage but to no avail.

“Could you imagine, the local authority of Maryland County promised us to help the community with tools but failed to fulfill their promises only caritas helped us with tools,” she said.

“For this reason, we have been constrained to help ourselves because we were really looking up to our government for this work, but they let us down.”

“This community is old, so we have to hold together as one family that’s the only way we can be on path with other developing communities in Harper,” he said, calling the government to prioritize road connectivity to improve the lives of rural Liberians.

“This road is our own road; therefore, our today’s works mean that we can undertake any developmental works without support from the government,” added Victor Quitee, a youth of the community.

According to Victor, the community faces serious difficulties during the raining season. “When the rain falls, all the drainage can be closed and the water cannot move freely, as a result; we experience both overflow of water in the neighborhoods and mosquitoes,” he said.

Like Victor, Philip N. Elliot, a member of the airfield community and a student of public health, said that more concentration and awareness have been placed on the coronavirus pandemic but Malaria and Typhon are also leading sickness that most people experienced at the result of unsanitary environment.

Harley Elliot, a civil society actor in the county, lauded the efforts of the community but then frowned at the past county administration for not attending to the plight of the community.