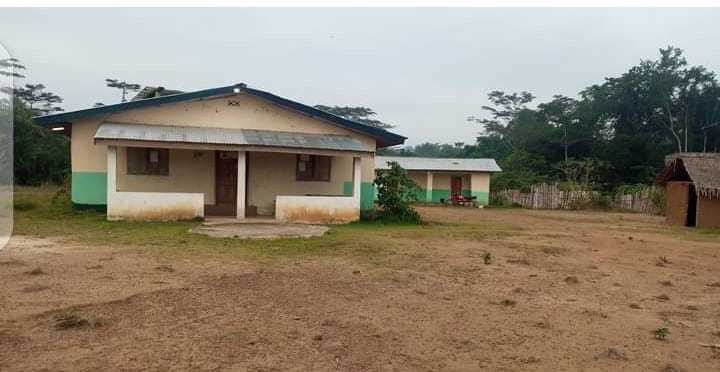 Belle Distirict, Gbarpolu County – Residents of Kondesu Clinic in Belle district have raised serious concern about the sudden closure of the main health facility in the District.

The clinic stopped rendering services to its almost 7,000 catchment population on November 15, 2020 after five support staff alleged that they were not being paid for over two years.

“Since this government took over, we are yet to get incentive from the county health team,” says James Dwana, the registrar — who is one of the unemployed supportive staff of the health facility.

“We have complained over and over to no avail. So, this is why we left the work to focus on our farming activities to be catering to our family,” added Anthony T. Morlu, the clinic vaccinator.

Ms. Ruth Dorley, another aggrieved support staff, said they opted to “sit down so that [the] government can think about us and pay us our money we worked or put our names on payroll.”

The action of the support staff prompted the two employed health workers to abandon work. They raised concerns about not being able to perform the overwhelming tasks of serving the population.

Meanwhile, the Health Facility Development Committee (HFDC) chairperson, Samuel Kpissay has warned that if nothing is done quickly to resolve the situation more lives will be in jeopardy.

“We have listened to these people that they are not taking pay, so we are again asking the government to do their part — to encourage these people go back to work,” he said,

“Or else some people will be dying here from common sickness like malaria, diarrhea. Even right now, babies and pregnant women lives are threatened by this situation.”

Bendu Tulay, chairlady of the community women, supports Mr. Kpissay’s point, adding that the need for intervention is very urgent.

“This area is far – the road is bad, the bridges are not good; so, we want our people in government and the people that helped us with this clinic to come and help us now,” she said.

Other local leaders of the catchment communities are also calling on the county authorities including lawmakers to provide timely support for the only health facility in the area.

Located in Lorbazu Clan of Belle district about 130 kilometers away from the main referral hospital in Bopolu City, the Kondesu Town’s clinic was built by the Kuwaa Mission based in the United States and an auxiliary of the Lutheran Church.

After its construction, the facility was later turned over to the County Health Team in 2015 and it began operations the following year – providing free healthcare services to the communities.

Prior to its sudden closure, the clinic was serving eight major towns in Gbarpolu and Lofa Counties. Communities in Gbarpolu are the Kondesu, Gatima, Lowoma, Sassasu, Gouma and Gbeyankai towns while the other two – Loboda and Kondehun towns are in Zorzor and Kolahun districts of Lofa County.

Meanwhile, the County Health Team assigned Surveillance Officer (DSO) in the area, Thomas Z. Kowel on January 15, 2021 use social media to warn about the increasing health risks presented by the closure of the facility.

“State actors, we need your interventions for this clinic to restart it operations,” Kowel wrote to Facebook. “Pregnant women, babies are not receiving health care in this part of Liberia. Community delivery is on the raise.”

Lorbazu Clan in Belle district, the clinic is located, is about 130 kilometers away from the main referral hospital in Bopolu City

At the same time, the Officer-In-Charge (OIC) of the clinic said the county health authority is aware of the situation but is yet to intervene.

Anthony Tamba said two persons — he and the certified Mmidwife (CM), who is currently pregnant and on maternity leave, cannot run the health facility.

The operate a clinic requires having an OIC, CM, registrar, dispenser, vaccinator, security and cleaner, he said.

When contacted, the Clinical Supervisor of the County Health Team, Bennie Clark said, “We don’t have any sources of getting money to pay supportive staff who are not in the government employed”.

Mr. Clark said incentives that were allotted for support staff has been cut and that the Ministry of Health has instructed the County Health Team not to incentivize those not hired by the government.

“We have taken an action point, recommending to the superintendent office that the clinic is under-staffed, and one man cannot run a clinic and so we need the county leadership involvement,” Clark said of moves the CHT has made to remedy the current situation.

But County Superintendent J. Keyah Saah of Gbarpolu disclosed that some of the challenges in the health and other sectors will continued to exist due to lack of county sitting for the past four years.

“We supposed to be addressing some of these issues, not the central government, but our feet and hands are tied to the extent that we are unable to address this Kondesu issues now,” Superintendent Keyah said.

“But we will not give up, we’ll keep talking to other good people in and outside of this county – and the national government as well on this health issue in Belle District and other pressing situations in Gbarpolu, and I’m sure, that one day, if not all, some will be resolved.”