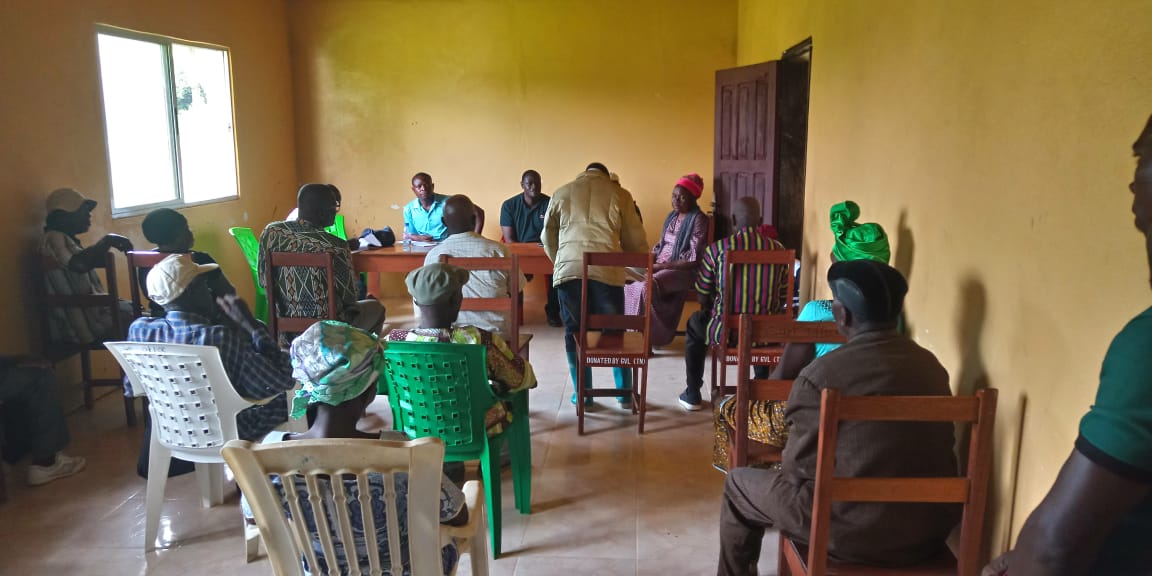 The mapping exercise, which began on June 4 in Harper and Pleebo of Maryland County, was replicated in Barclayville, Grand Kru County and concluded on June 5 in Greenville, Sinoe County.

The mapping exercise was conducted in the form of “Town Hall meeting” and brought together worker unions of Golden Veroleum Liberia (GVL), Maryland Oil Palm Plantations and Cavalla Rubber Corporation (CRC), members of the Community Representatives Committee (CRC), traditional leaders of communities impacted by the companies’ operations, Civil Society Organizations and the local county administrations of the three (3) counties.

Speaking during the engagements, the community dwellers alleged that Golden Veroleum Liberia and Maryland Oil Palm Plantations (MOPP) the companies that are cultivating oil palm in the South-eastern part of Liberia and the Cavalla Rubber Corporations,
were exploiting and depleting their forest land without their (the locals) input in the selection of land to be used by the company.

The participants, who appeared emotional during the session, pointed out that the companies indiscriminately plant their palm as far as using town lots belonging to individual families.

A women representative, Nancy Chie lamented: “The Maryland Oil Palm Plantations people told us that once they have had an agreement with our government, they can plant their palm anywhere in Maryland County. As we speak, the company’s palm plantations are extending into our private dwelling places. All around Pleebo, you will see palm trees belonging to the company”.

She maintained that the situation is causing serious embarrassment for the community. Making backyard garden to support the livelihood of most families has been made impossible because of the company’s operations, she added. Some of those garden produce you usually see whenever you enter a city like egg plants, bitter balls, and okra, you will never see them in Pleebo because MOPP finished taking all of the land within the city-limit”, Chie, a single mother of five children and three grandchildren, said.

In an interview with reporters in Pleebo following the town hall engagement, a youth representative of one of the impacted communities in MOPP concession area, Jeremiah Quiah alleged that sources of safe drinking water for the locals were being polluted by the company.

“When the company clears the land to plant new palms they usually dump the dirt in the creeks that our people use for drinking. And the frustrating part is their refusal to construct hand pumps in the communities affected by their work”, Quiah said, adding that the lack of safe drinking water in local communities around MOPP’s operation is causing unbearable living conditions for the dwellers as according to him, the residents are forced to drink from the contaminated creeks.

Among those residents who expressed their anguish about MOPP and CRC’s operations in Maryland County were members of the Redundant Workers Association, who alleged “inhumane” behavior being meted against them by the two companies and the government of the Republic of Liberia. They told reporters that since their “unlawful” redundancy by the companies, they have sought the interventions of the Liberian government through the country’s justice system to no avail.

Explaining their ordeal, a member of the CRC and MOPP’s Redundant Workers Association Gwiah Korseh-Toe, Sr said they have taken appeal to the Supreme Court of Liberia but lamented that the case yet to be heard.

Korseh-Toe,ex lained: “when we were redundant in 2020, we filed our complaint with the Ministry of Labour in Maryland County, because we felt the process was illegal. Since there was no redress, we decided to go as far as the Supreme Court of Liberia, yet no solution to our problems, though the companies continue to operate in the county. Since politicians always abandon us after winning our sentiments during elections, we have vowed not to participate in future elections in Maryland County until our case is decided. Mind you, many of us are leaders in our respective communities and families and we have followers who listen to us.” The cleric who runs one of the protestant churches in Maryland County meanwhile admitted that many members of the Redundant Workers Association, especially within the leadership, are church leaders, noting that the companies are using their religious roles in the county as an opportunity to exploit the association. Korseh-Toe, Sr claimed that “each time we ask for our benefits, they will psychologize us calling us pastors who supposed to be talking to the other aggrieved redundant workers, but they have over the years failed to treat us as they portray”.

The management of the the Cavalla Rubber Corporation and the Maryland Oil Palm Plantations declined commenting on the allegations raised by the citizens.

In Grand Kru and Sinoe Counties, the residents alleged that the Golden Veroleum was “making life unbearable” for the their compatriots in those counties.

In conversation with a team of Concessions Conflict Mappers, the citizens alleged that GVL was involved with bad labor practices, destruction of the biodiversity in her concession areas, and degrading the environment, among other things.

According to a member of the Community Representative Committee (CRC) in Jalatuen in Grand Kru County, Matthew Simbo, his community’s road is in a deplorable state, even though he said the company is plying that stretch of road, transporting their raw materials to the refinery (Golden-SIFCA) in Maryland County.

“Besides the bad road conditions, it was agreed that the company should pay what we term as “Community Development Funds” (CDF) into the community covers for development purposes. But it is so disappointing to note that the company has done nothing to get the money remitted into the county’s covers”, Matthew Simbo said, adding that the operations of GVL is depleting their community forest as according to Simbo,

“In Geneken, for example, the company has entered our sacred groove and they have started cutting down our sacred and cultural heritage”. He further explained: “the company recently experienced honey bees invasion at one of their clearing sites when they had gone into one of our sacred bushes to cultivate their palm. That’s the benefit of disrespecting other people’s culture and tradition”.

However, the management of the Golden Veroleum Liberia has denied the allegations, saying that some of the claims by the residents of Grand Kru and Sinoe Counties are not genuine and lack legal reliance.

Making a PowerPoint presentation during one of the engagements in Butaw, Sinoe County recently, the Genera Manager for Sustainability at Golden Veroleum Liberia, Michael Abedi-Lartey, clarified that road construction, including repairing bridges was not enshrined in the Concession Agreement between his company and the Liberian government.

Abedi-Lartey, however, indicated that interventions like road, bridges, schools, clinics and handpump construction are “good will gesture” from the company to the impacted communities, interventions he said are already visible in GVL impacted communities. He said, as embodied-in the Concession Agreement, his company has been paying in each impacted community’s CDF account Five (5.00) United States Dollars for every hectare planted, though Simbo alleged that it has not been happening. Abedi-Lartey then lamented that strick actions by the locals always cause losses to the company and called on the Liberian government to intervene.

Meanwhile, the County Inspector of Grand Kru County, Jacob Karmbor Weah indicated that the move by the community to use “traditional bush” society to halt the company’s operations was against traditional norms and values, ordering a complete stop to such act.

Reginald Mehn, the National Coordinator on Concession Conflicts Resolution at the Ministry of Internal Affairs, disclosed that findings from the mapping will help the government make informed decisions by identifying ways to mitigate concession conflicts in the country.

He said the exercise will be replicated in other counties where there are concessions. Mr. Mehn said the government will use the data to enhance the job of the Inter-Ministerial and Agency Committee on Concession Conflict Resolution as a “one stop shop” in resolving all concessions related conflicts in the country.