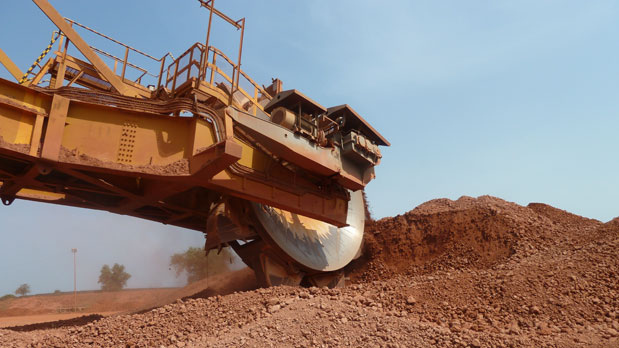 Monrovia – While on a four day tour of Uganda in June this year, Liberia’s Vice President Madam Jewel Howard Taylor made a claim that her country has over four billon metric tons of iron ore deposit.

A social media post published to the official page of the Office of the Vice President on June 16 referenced Madam Taylor as saying:

The Facebook post also mentioned that in her bid to push for “collaboration with Uganda on the establishment of a steel industry”, Madam Taylor claims that “Liberia has the ability to supply the entire Africa with steel based on its deposits of Iron Ore”. 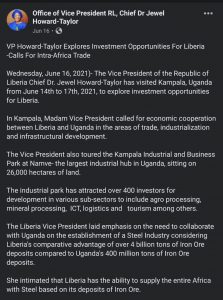 Does Liberia have “over four billon metric tons of iron ore deposit?

When contacted to verify the claim made by the Vice President, her office made available a research document by United States based International Trade Administration. However, the stats in the document did not show that Liberia has four billion metric tons of iron ore deposit as claimed by the post attributed to the Vice President.

Further fact checked by LVL found a research article on Liberia’s mining sector published on July 18, 2017. The 2017 article relied on a 2012 research which states that, “Liberia is estimated to hold reserves ranging from between two to five billion metric tons of iron ore and three million ounces of gold”.

The Ministry of Mines and Energy did not respond to our inquiry into the four billion iron ore deposit claim made by Madam Taylor. Data seen on the website of Statista, a German company that specializes in global market and consumer data, reveal that only South Africa is amongst the seven countries with the highest deposit of iron ore in the world.

Also, an October 2018 research article published on ScienceDirect.Com states that despite “a long period to assess the iron ore resources of Liberia, large tracts of the country are poorly known in detail and has not been systematically explored using modern techniques” to identify areas prospective for new iron ore deposits.

What Is Liberia’s Steel Production Capacity?

According to a 2017 data published by the US Geological Survey, Liberia is ranked 27th on the list of 38 countries in the world. South Africa (6th), Mauritian (16), and Sierra Leone (22nd) all ranked higher than Liberia.  As of 2020, no African country is amongst the top seven steel producers in the world, according to an NS Energy report referencing data from USGS.

Additionally, Statista ranks ArcelorMittal in South Africa as the largest steel manufacturer on the African continent, adding that the company is responsible for the majority of basic iron production while South Africa – as a country — produced only 6.3 million metric tons of steel in 2018 when Africa had a demand of 33.4 million metric ton of steel.

Liberia lacks industrial factories for significant steel production to supply the entire continent which has made the country to be largely an exporter of raw iron ore, according to the research article published in ScienceDirect.Com. 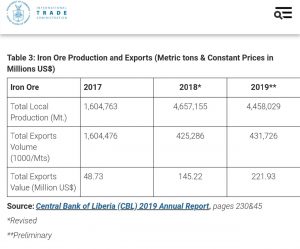 Although there exist no latest statistics on the country’s iron ore reserve or deposit while mining companies continue to operate, the claim by Vice President Taylor is not total correct – it might have been made based on projections and not current available data.

Also, relevant data acquired through research, concludes that Madam Taylor’s claim that Liberia has the ability to supply the 33.4 million metric tons of steel to the entire Africa is also incorrect.

This claim is however incorrect as there is no fact that shows that Liberia or any other African country has the single ability to supply the 33.4 million metric tons of steel demand of the African market.

Fact Check: Congress for Democratic Change Did Not Win 72 Legislative Seats in 2005 as Claimed By Commerce Inspector General
Fact Check: Is Liberia Recording Highest Daily Covid-19 Cases in West Africa? This is What We Found.