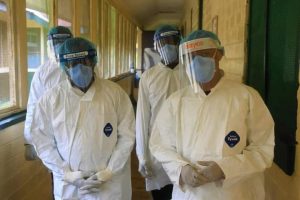 Dr. Kateh (right) along with other doctors of the J.J Dossen Hospital during his visit to Maryland County | Photo By: Moses Geplay in Harper

The Medical Director of J. J. Dossen Hospital in Harper has announced that it has the capacity to isolate people who have been tested positive for Covid-19 and quarantine those who are showing symptoms but have not yet been tested.

“Basically, we admit severe and critical patients here, but notwithstanding, we look at other factors like age, people who are elderly, we keep them because they stand a risk of deteriorating,” said Dr. Emmanuel Flomo.

Dr. Flomo made the disclosure during the visit of Dr. Francis Kateh, Liberia’s Chief Medical Officer, to the County Health Team to assess the Covid-19 situation in the county.

Dr. Flomo later told LocalVoicesLiberia that “people with mild to moderate Covid-19 infection are also admitted at the treatment center based on where they come from”, adding that the County Health Team’s primary goal is to stop the transmission of the virus.

Meanwhile, Viola Karanja, Deputy Director of Partners In Health, has reaffirmed the institution’s commitment to supporting health facilities in the county with the necessary medications, food for patients, and other essentials to facilitate health service to buttress the fight against Covid-19.

She added that PIH will also assist patients who are on home-based care to ensure that they follow the preventive measures meant to reduce the risk of transmission in the communities.

“Our mental health department is also working with the county mental health team so that the social and psychosocial aspect is also looked into,” she said during the meeting with Dr. Ketah.

During the meeting, all the health stakeholders called on communities to adhere to all of the preventive measure to curb the spread of Covid-19. The county has so far recorded a total of 45 confirmed cases, 4 deaths, 30 recovery, and 11 active cases as of July 21, 2021. 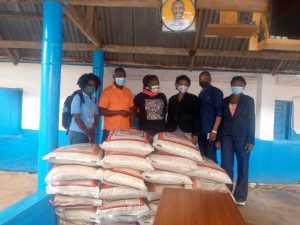 Members of the Nursing board pose for a phorgraph after making the donation to nurses at the Jallah Lone Hospital in Bopolu City | Photo By: Henry B. Gboluma, Jr.

The Liberia Board of Nursing and Midwifery recently donated 25 bags of 25kg rice as “a motivational package” to nurses at the Jallah Lone hospital in Bopolu City. The donation came just before the Independence Day celebration on Monday, July 26.

During the presentation, Madam Jemima W. Toe, who is the M&E officer of the LBNM, said the donation is a gift to appreciate nurses during Covid-19 crisis, while calling on nurses to remain committed to delivering health care to people in that part of the country.

Nursing Directress, Madam Yassah K. Mulbah, thanked the nursing board for the gesture while Madam Sao Zor, the Administrator of the Jallah Lone Hospital, assured that the rice will be used for its intended purpose.

For his part, Dr. Musa Zuannah, the County Health Officer, called on other organizations to “follow the footstep of Liberia Board of Nursing and midwifery in motivating nurses who are delivering quality healthcare to our people”. 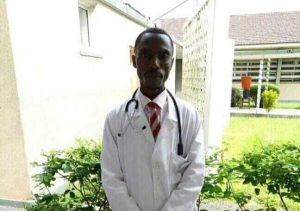 Zwedru — Dr. Tebo Gbotoe has taken over as the new County Health officer of Grand Gedeh after Dr. Augustine Fannieh was transferred to Margibi County in the same position.

Dr. Gbotoe has promised to uphold the good works of his predecessor and the people of Grand Gedeh County, adding that he will “work in unity with members of the team to achieve more success”.

In a brief farewell remark on July 29, Dr. Finnneh recalled some of the achievements he made as CHO of the county.

He named the renovation of the County Health Team office, cleaning up of ghost names on the payroll, training of additional midwives and physician assistants as well as ensuring the timely supply of medication to the health facilities, among others.

He said because of the good system he introduced, the County Health Team scooped the best performing CHT in the country a year ago.

“I have no control over my reassignment, but [I’m] confident of the system that I built over the years will be managed by those taking over,” Dr. Fannieh concluded.

Meanwhile, citizens who spoke at the turning over ceremony, praised Dr. Fannieh for saving the county from recording high number of cases of Covid-19. The citizens then called on the newly appointed CHO to work in the interest the people. 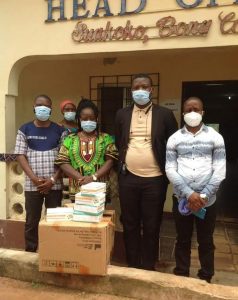 Presenting the items on behalf of the VP, the Deputy Press Secretary in the office of the vice president, Philip Singbeh, said the test kits will ensure that people at tested at health centers to avoid situations where people who are not infected with Covid-19 get medical service.

He added that it will ensure health workers are protected as they make necessary sacrifices in providing medical services to the communities.

Taking delivery of the test kits, Bong County Health Team Administrator, Jonah N. Togbah and the County Health Team Officer, Dr. Jonathan Flomo, thanked the Vice President for “always coming to their aide, especially during this period of a health crisis in the country”.

Meanwhile, Dr. Flomo and Mr. Togbah called people of the county to work with the Ministry of Health and partners to curb the spread of Covid-19.

It can be recalled that during the first wave of the virus, Madam Taylor provided food to more than 2,000 disadvantaged girls and procured oxygen tanks to several hospitals including the 14th Military Hospital.