Around The Country: Updates From

Students of the Sodoken Central High School in Pleebo City are upbeat about carrying out health awareness messages amongst their peers | Photo By: Moses Geply

Harper – Students of the Sodoken Central High School in Pleebo have launched a health club to educate their peers about health-related issues including mental health and COVID-19. The launch, which took place on July 30, brought together scores of students, teachers, and health workers.

Ezekiel D. Cholo, President of the Health Club, said the club will work to educate people about COVID-19 and other diseases. “The objective of health club in schools is not only to support the government in the fight against Covid-19 but to promote the well-being of the pupils and the teachers; to make the students key players in the transformation of their environment and transform the school as a place of promotion of health and human rights within the community,” Cholo said.

The guest speaker, Mr. David K. Bedell, lectured on mental health and the importance of prioritizing good health practices during and after school hours.

“Let’s always keep our campuses clean if we must be safe from sickness. Students to keep yourself clean and avoid stigmatizing each other on health condition; it is wrong,” Bedell said.

Mr. Moses Harmon, who is the County Health Team focal person for mental health, promised to work with the high school health club while Emmanuel T. Freeman, principal of the Sodoken Central High school hailed the students for the initiative. 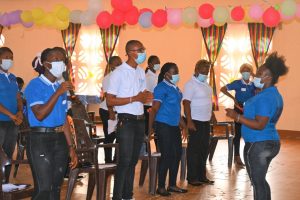 Sixteen persons were part of the first cohort of the training program | Photo By: Bryan Dioh

Madam Vola Karanja, PIH Deputy Executive Director, said, Global Action in Nursing (GAIN) is a woman-led project established at the University of California San Francisco, USA. She added that the initiative was extended to Liberia in 2020.

The program was specifically extended to Maryland County in May 2021 based on the need to reduce the high rate of neo-natal and maternal mortality, she said.

The 16 persons who graduated from the first cohort of the program include nurses, midwives, and nursing students. Each fellow received mentorship and training in their various departments to improve nursing engagement and competency in neonatal care and the management of women during pregnancy, delivery, intrapartum and postnatal care.

The goal is to establish Maryland County as a model county for reproductive maternal newborn child and adolescent health and PIH is committed to reaching all women and children in need and delivering respectful, high-quality care, Madam Karanja said.

Cartoons of drugs (pictured) were amongst the supplies sent to the F.J Grante Hospital in Greenville | Photo Provided by: Sarah Ellis

Speaking to journalists in Greenville, Dr. Alvin Gray, Medical Director at the hospital, described the arrival of the supplies as a “serious intervention” which will help ease some of the many challenges at the facility.

Meanwhile, Dr. Gray has stressed the importance of having “stable electricity” at the county’s major health facility. At the same time, he called on people to desists from labelling the hospital as a “death center” — a misperception that undermines the work of health workers, he said.

He also disclosed that the hospital is under-staffed, adding that the low manpower poses serious hindrance to the smooth delivery of health care services to communities.

Buchanan — Barley a week after Representative Matthew Joe of Buchanan District provided L$100,000 to the Liberian Government Hospital, the Medical Director of the hospital has announced the fund was used to purchase of several boxes of drugs.

The lawmaker had earlier announced that the cash donation was part of the US$30,000 that was allotted to lawmakers to carry out development projects in their respective constituencies.

Dr. Moses Wheidegar told reporters on Monday that the hospital decided to use the money for the purchase due the shortage of essential drugs at the hospital.

“The hospital needs drugs and so the little cash that was provided by Representative Matthew Joe helped in the process,” Dr. Wheidegar told reporters in Buchanan. 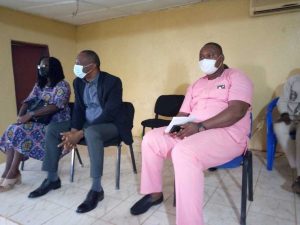 Kakata – Dr. Myers Pajibo has turned over to Dr. Augustine Nyankun Fannieh, who is the newly appointed health officer of Margibi County.

Turning over the medical symbol of authority, Dr. Pajibo said: “Turning over of office is fearful considering the relationship built over the years but it is important to make a change. I was not surprised at the decision of the Minister of Health because I was informed via mobile phone about my replacement, and I was asked to select where I want to work”.

I have decided to get involved with clinical work instead of administrative work to avoid pulling here and forth, he added.

He called on staff and health workers to “respect” Dr. Fannieh as they did to him while also asking “those who I wronged during his three-year service” to forgive him.

For his part, Dr. Fannieh, who worked in Grand Gedeh County before his new assignment, called for “cordial working relationship amongst health workers in the four health districts” of the county.

“We will make sure all indicators are very good and well improved from the Ministry of Health’s standpoint; I promise,” he said, adding that the fight against Covid-19 is a key priority for him.

Zwedru — Dr. Tebo Gboduo wants citizens and residents of the county to support the health system with drugs supplies to ensure the system is adequately improved.

Dr. Gboduo, who was recently assigned to the county, said he’s aware of the many challenges hospitals and clinics are faced with.

“I am not a new person within my own Grand Gedeh County,” he said. “Martha Tubman Memorial Hospital and the other health facilities across the county need more attention from our fellow Grand Gedeans and residents”.

He said these facilities often lack gloves and essential drugs to treat patients; so, in order for this administration to be successful, we need every citizen and resident’s support.

Dr. Gboduo made the appeal when he chaired the first stakeholders engagement meeting on August 3 in Zwedru.

In response, Grand Gedeh County Assistant Superintendent for Development, Madam Betty Breeze Doh, assured that the county administration will lobby with people and organizations in and out of the county to lure more support to the county health system. 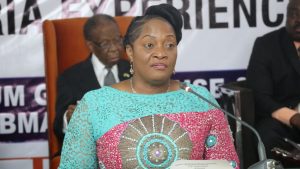 Gbarnga — Liberia’s Vice President, Madam Jewel Howard Taylor, has called on Liberians in and out of the country to join hands together and battle against COVID-19 in the country.

In order to defeat the third wave of the coronavirus pandemic as a county, there is a serious need that citizens put aside their political differences and work together for the common good of the people, she said.

Said Taylor: “If we must succeed in fighting COVID -19, we must work together as partners and citizens of Liberia. We must collaborate, coordinate and provide timely and affordable communication to fight COVID-19 in Liberia”.

According to her, no one entity can do it alone, citing that collectively, Liberians can fight COVID-19 at the various communities, churches, mosques, job places among others.

She made the call in Gbarnga over the weekend to a cross section of community members.

“We are encouraging all Liberians as partners to make use of the J&J vaccine, if you have not taken your vaccine please do so for the safety of you, your fa