Around The Country: Updates From Five Counties – August 23, 2021 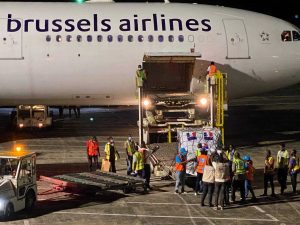 The doses sent to Grand Bassa County were part of the 302,400 doses of Johnson & Johnson COVID-19 vaccines donated by the United States Government through the COVAX facility.

Buchanan — As the fight against the third wave of COVID 19 continues, the Ministry of Health has given health authorities of Grand Bassa County about 19,000 doses of Johnson and Johnson vaccine to vaccinate people of the county.

The doses of vaccine were presented to the county health officer during his recent trip to Monrovia.

Making the disclosure via telephone from Monrovia, the County Health Officer Dr. Sylvester Wreh told Buchanan-based reporter that the J&J vaccine is expected to be given to at least 80 percent of the population in the county.

Meanwhile, the CHT is yet to begin the vaccination of people in the county despite receiving this quantity of vaccine. It’s unclear why the delay but Dr. Wreh has promised to give full details shortly.

Lofa County has received a total of 24,805 doses of the Johnson & Johnson COVID-19 and will shortly begin administering them to the public after when a strategy is finalized, according to the William Sherman, the County Health Promotion Focal Person.

“We should have launched it last week Friday, but we had some constrains and we are also concluding the development of our risk communication strategy,” Sherman said.

The County health promotion focal person of Lofa county health team said, unlike the AstraZeneca vaccines which prioritized health workers before later being administered to the public, the Johnson & Johnson COVID-19 vaccines will be available to the public.

“For this [Johnson & Johnson COVID-19 Vaccines], it will be opened to everybody. It’s not going to be like the AstraZeneca that we give priority to health workers”, he said while expressing optimism about increased vaccines intake in the county. 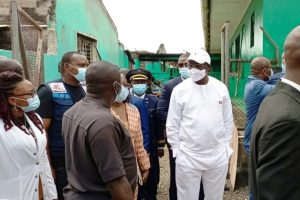 During his visit, President Weah toured the scene of the fire disaster

Kakata Margibi county – President George Weah has given hope to the citizens of Margibi county after fire recently gutted the major government-run referral hospital in the county.

President George M. Weah visited the C.H Rennie fire disaster site where he spoke with the press and expressed his regret.

“In the case of C.H Rennie Hospital, the issue is not just about reconstruction to quickly begin caring for patients, but what can be done to avert the reoccurrence of fire incident at the facility,” said President Weah.

Pondering on the way out, president Weah, asserted: “The significant way to handle fire out break at a hospital is to always have fire extinguishers and fire service providers like the electricians to ensure safety in the case of any fault”.

He asserted that the damaged could have been avoided if there were fire extinguishers and electricians on ground to sort out the problems.

“This is national emergency; the government is expected to quickly act in order to restore the hospital for operations,” he said, disclosing that the Disaster Management Agency and key stakeholders will meet and discuss the government prompt intervention for reconstruction of the hospital. 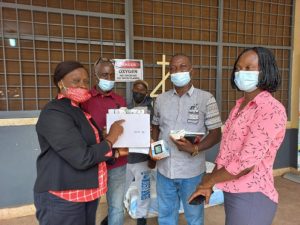 Dr. Sibley and Madam Kai-Lewis including others members of the County Health Team | Photo By: Emmanuel Mafelah

Gbarnga — In continuation of it efforts in the fight against the COVID-19, REO-International-Liberia has presented several boxes of essential medical equipment to the Phebe Hospital in Suakoko District, the County Treatment Unit, the C. B. Dunbar Hospital in Gbarnga.

Items donated include, 10 pulse Oximeters, 10 forehead infrared thermometers, and 10 electronic blood pressure monitors to the County Treatment Unit — 5 sets each to the Phebe Hospital and the C.B Dunbar Maternal Hospital.

Presenting the health equipment to the different health centers in the county recently, REO-International Liberia Office Manager, Edina Kai-Lewis said the gesture is the organization’s contribution to buttressing the County Health Team against the coronavirus pandemic.

Madam Kai-Lewis said her organization is passionate about the well-being of health workers and wants to see them properly equipped, well paid to give their best to the ordinary people, adding that the organization remains commitment to supporting all healthcare providers across the country.

Taking delivery of the supplies on behalf of Phebe Hospital and School of Nursing, Phebe hospital Medical Director, Dr. Jefferson Sibley, lauded the organization for the support.

He said though the boxes of equipment donated are in small quantities, but are very essential to Phebe, C. B. Dunbar hospitals including the County’s Treatment Unit that are experiencing some major challenges as the response against COVID-19 continues.

The donation is REO- International- Liberia third contribution to the fight against COVID-19 in the country. The organization through its Executive Director, Eric Wilfred Olson donated eight fingertip blood oxygen monitors and 10 touch-less digital thermometers to the John F. Kennedy Hospital, among others. 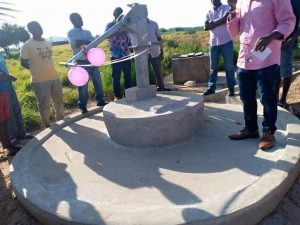 Harper — The Marylanders Association in the United States of America recently turned over two hand pumps to citizens of Harper and Karluway districts.

Mr. Alex Bai Davis, who represented the association, dedicated the two pumps, and thanked the residents for their support.

He described the group as a non-political and that the gesture is a way of identifying with people of the county.

“This is not the first project for the National Maryland Association in the United States of America to be constructed in the County, they have renovated some schools building in Barrobo distinct,” said Larry G. Geekor, chief contractor of the organization, who added that the project cost US$4,000.

“Water is life, as such, we want to appreciate our own children in the USA for looking back to our people that are really in need of safe drinking water,” Commissioner Jackson said. “I am recommending to the organization to help and recondition other damaged pumps in the County, areas like Rocktown, Middle town and other parts of the County”.