Around The Country: Updates From Three Counties – September 3, 2021

As people of Nimba County await the roll out of the Johnson and Johnson and the AstraZeneca COVID-19 vaccines the health team has recorded another 37 new cases of COVID-19.

The disclosure was made by the Nimba County Health Officer Dr. Nettie Joe during a meeting held Thursday in Sanniquellie.

“These new cases were recorded at the Porte of entry between Liberia and Cote D’Ivoire”, Dr. Joe disclosed, noting that this has opened “a new window for rigid contact tracing”.

“We are doing everything to ensure that we put the county back on its recovery path. Prior to these discoveries, Nimba as a county was 14 days away from being declared free of the Coronavirus disease”, she added. She however alarmed that the “situation has dragged the county to square zero”.

Meanwhile, the CHO urge people to continue observing the health protocols put in place by the Ministry of Health and partners.

“Our people should not relax on the health protocols. When people take health matters lightly, it leads to resurgence and this is not good for our recovery process”, Dr. Joe concluded.

This comes as the CHT postpones the rollout of the vaccines to September 7 which should have begun September 2.

The Thursday meeting was intended to update stakeholders of the county about the upcoming vaccine rollout.

Speaking during the meeting, the Clinical Supervisor of the CHT, Lee Danno, indicated that all is now set for the launch of the vaccine.

“We have recruited 120 community mobilizers for the six cities and these mobilizers will carry on health talks about the vaccine benefits before the kickoff of the vaccine in the six health districts in Nimba County,” Danno explained.

He furthered that there will be 60 Trained Traditional Midwives to ensure that pregnant women and breastfeeding women also vaccinated.

Meanwhile, in Ganta city a team of strong young volunteers from the Teach for healthy Lives (T4HL) headed by a Youth Exchange and Study Program (YES) have conducted a one-day workshop training for over 75 young-baby mothers from aged 15-30 years.

“We as young health workers from universities thought it wise to organize ourselves to give back to our country through health education targeting our baby mothers — teaching them how to prepare local-made baby food,” she said.

She stressed that malnourished children barely survive terminal illnesses which lead to low IQ, risk of blindness, and brain damage. “Our dream is to say no to malnutrition in Liberia and the world at large,” said Sampson.

Locally made food for babies produced by the team were donated to the participants. Several beneficiaries thanked the group for the initiative. 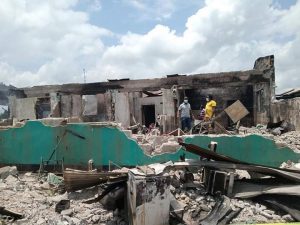 The C.H Rennie Hospital in Kakata was a major health facility in the county until it gutted with fire on Sunday, August 15

Kakata — A team from the Ministry of Public Works on Thursday August 2, assessed the destroyed compound of the C.H. Rennie Hospital ahead of reconstruction of the facility. The hospital building gutted fire on the August 15 and was left completely destroyed.

Speaking to a team of journalists during his assessment visit in Kakata on Thursday, the director for public building and construction standard at the Ministry of Public Works, George W. Keizea, said the assessment was based on a mandate from the President.

“Our presence here today is to reassure the people of this county that the construction project will kick off soon, few days from now the damaged structure will be brought down, blueprint are expected soon, and we will build a modern structure other than what was there,” Mr. Keizea said.

However, Mr. Keizea did not disclose when work will commence but assured that all safety mechanism to prevent a reoccurrence will be put in place during the construction of the new building.

Greenville — The County Health Team through its community health department has commenced the distribution of neglected tropical diseases medications to patients within the county’s 10 health districts.

William Bedford, who is the community health department director, disclosed that the initiative starts following series of trainings for health workers on the management of NTDs cases.

He added that the department is determine distribute the drugs to needy patients.

River blindness and leprosy are some of the prevalent NTDs they will be treating, adding that the drugs distribution will also target people who are not showing any signs of NTDs to enhance the preventive measure amongst people who are vulnerable to NTDs.

He disclosed that some distributors were climaxing their distribution while others are still distributing. Bedford then called on communities to cooperate with health workers in the filed for a successful distribution process.