Around The Country: Updates From Five Counties – September 20, 2021

The J&J vaccine was launched on September 17 in the county | Photo By: Ben T.C. Brooks

Zwedru – The County Health team and partners have officially launched the Johnson & Johnosn Covid-19 vaccines in the County. The launching exercise brought together representatives from the World Health Organization (WHO), Ministry of Health (MoH), and officials of the county administration.

During the launch, Grand Gedeh County Community Health Department Director and Acting County Health Officer Mr. Netus Nowine disclosed that the county has received over 5,000 doses of the J&J vaccine.

He said people, aged 18 years and above, are eligible to take the vaccine while dispelling rumors that the Covid-19 vaccines are harmful and causes the death of people.

He said vaccines coming into the country are tested and proven by health experts, making it safe and effective for people to take.

Mr. Nowine assured that the health workers will provide information about the vaccine, Covid-19, and other health related issues and warned against people relying on misinformation share via social media.

He then called on people to take the vaccine and get protected against COVID-19.

Speaking on behalf of the administration, Mr. Paul Neoh, County Inspector and acting Superintendent of the county, assured that district commissioners, chiefs and elders will buttress the effort of the health team to get more people vaccinated.

The rollout of the Johnson & Johnson Covid-19 vaccine was launched on September 17 at the Martha Tubman Memorial Hospital in Zwedru. 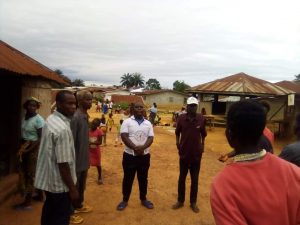 Sanniquellie — A team of social mobilizers sent across Nimba County to ensure that the entire population of the county access the Covid-19 vaccines has expressed concern that people in hard-to-reach communities are in dire need of the vaccines.

According to the head of the team, Cecilia Korto, locals they’ve spoken to in these rural communities claimed that they are prepared to be vaccinated.

The team comprising of Nursing students from the Nimba University were sent under the supervision of the Nimba County Health Team was sponsored by a group of sons and daughters of Nimba County residing in the Diaspora under the umbrella “Diaspora Nimbaians Fighting Covid-19 in Nimba County.

According to Korto, most of those communities have no temporary centers for vaccination. “We were surprised at the way the people welcomed us in their towns. We started the campaign from Sanniquellie Mah Health district from September 15 and ended in Tappita Health District today-five days in total.

“Our strategy was to have talks with the community dwellers and explain the health tips about the vaccines and the benefits, including the Raffle Draw that will be carried on by the Diaspora Nimbaians in November for those who will take the vaccines”, Miss Korto explained.

“When we told them, especially those in Zoegeh and Saclepea Mah health districts, that the messages were from their children, they agreed that they would never bring anything evil upon them. They willingly told us that when they vaccines reach them, they will get vaccinated”.

Miss Korto however observed that several communities, including Fleedin in Saclepea recommended that the Nimba County Health Team send vaccinators to their towns.

On September 15, the Nimba citizens in the Diaspora donated 40 bags of 25kg bags of rice to the County Health Team as support to health workers who are carrying out the vaccination process. 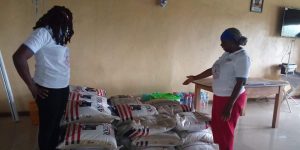 The Nimba citizens in the diaspora have also donated rice to support health workers rolling out the vaccine in the county | Photo By: Joseph Solo, Jr.

Meanwhile, Nimba County Health Officer Dr. Nettie Joe has reiterated that every health facility in the county has a permanent vaccination site.

“We depend on the Social Mobilizers and Risk Communication teams to give us information, and the reports that I am getting from the university students is helping us to make informed decisions. So, what we are asking our people to do is to act like the Diaspora Nimbaians in helping the county team to spread the health message about the vaccines.”

Participants of the five day workshop were urge to improve TB services at their respective health facilities | Photo By: Emmanuel Mafelah

The training targeted clinicians who are serving at the various health facilities to increase TB case notification rate.

The training, which started on Monday September 13 at the Bong County’s YMCA conference Hall, brought together health workers from 15 health facilities in Nimba, Bong and Grand Bassa Counties

At the end the five days training, Benjamin K. Quenneh, Case Management Coordinator of NLTCP, challenged the health workers to go back in their respective work areas and wage war against Tuberculosis.

TB, he said, is a serious health issue that needs the collective efforts of all Liberians.

“We will be checking on you; you were told that in order to eliminate TB in Liberia it depends squarely on us all, especially you clinicians,” Mr. Quenneh.

Also speaking, Bong County Health Officer, Dr. Jonathan Flomo, said the provision of quality healthcare service delivery remains a paramount concern of the Ministry of Health (MOH), despite the outbreak of the coronavirus.

Said Dr. Flomo, “Since Monday to today you have been here refreshing your brain so from now on, we expect that you will be able to cater to people suffering from TB and provide the right data and most importantly, understands the symptoms as you embarked on this new journey. Go and serve your country.”

Some of the participants who spoke with LocalVoicesLiberia said they were glad to have formed part of such an amazing initiative.

They then promised to use the knowledge acquired from the weeklong training to end TB in the country. 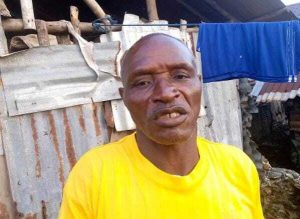 Mr. Attiogbe is the community chairman | Photo By: Moses Geply

Harper — The lack of latrines for residents of the Nyekanbo Community in Harper district, Maryland County is a serious concern as many residents openly defecate.

The densely populated community is situated along the Hoffman River where residents depend on fishing for survivors. In an exclusive interview with the Chairperson of the community, Mr. Patrick Don Attiogbe, he expressed sadness in the situation.

“We are suffering too much in this community, representatives and senators only come to us during elections, and because of the constraints our people are faced with, they are carried away by the food and non-food items that can be shared by the politicians,” he claims.

Another resident, Sarah Tweh said due to the lack of latrines residents usually use the river for defecation and fishing, adding that children most time get sick from running stomach (diarrhea), Malaria, or Typhoid. 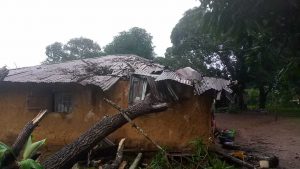 Bopolu – Sunny Wennie, the head of the people living with disabilities in Gbarpolu County, was on Tuesday night made homeless after a rainstorm destroyed his home.

The heavy thunderstorm tumble down a tree which then fell on the roof of his home. He was injured but is now recuperating after medical treatment.

He said, “The tree fell on me on the bed. It is my housemates that rescued me,” adding that all his belongings were destroyed.

“My documents, rice, and other materials in this room all got damaged. The rain was very heavy.  Everything I have got in this room got soaked,” he said.

Meanwhile, Mr. Wennie has called on goodwill people and institutions to help him resettle.