Fact Check: Coca-Cola Is Not Giving Out Gifts as Anniversary Celebration 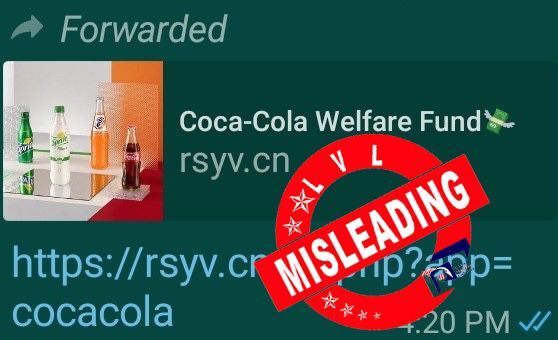 Paynesville — A WhatsApp message claims that Coca-Cola is giving out welfare funds to those who click a certain link that is being shared in multiple WhatsApp groups.

The link, which carries photos of some of the company’s products, takes you to a site containing the company’s logo but with a different URL or web address which reads: “paraviolinistas.com”. It then informs you that the multimillion dollar company is giving out gifts in celebration of its 20th anniversary.

The site also contains different set of questions such as “Do you know Coca-Cola?” “What do you think of Coca-Cola?”

It is also important to note that whatever way a person answers these questions, you are considered eligible to choose a box purporting to contain a gift.

After exhausting the aforementioned steps, you are then asked to share the link to five groups and 20 friends as a condition to claim your prize.

But our fact checks result shows that the link is not authentic, and that Coco-Cola company is not offering gifts, neither is it celebrating its 20th anniversary.

In further quest to prove the authenticity of the link, we copied and pasted the URL of the purported site into an online tool which rates website domains. The online tool then described the website link as “dangerous” to internet users.

Further check on the Coco-Cola company’s official website shows no information that it is offering any gifts to customers. Therefore, it makes no point to accept that the firm is behind the link that is being shared. The link about Coca-Cola welfare fund is not authentic. As often warned by IT experts, such link might be a misleading means of interfering with people personal information or a bait to infuse malware or virus in individual devices or systems. Therefore, internet users are cautioned against sharing and or opening these viral links.

Fact Check: No, 45,000 People Are Not Living With HIV/AIDS in Liberia
Fact Check: Yes, Smoking One Shisha Session Is Like Smoking 100 Cigarettes