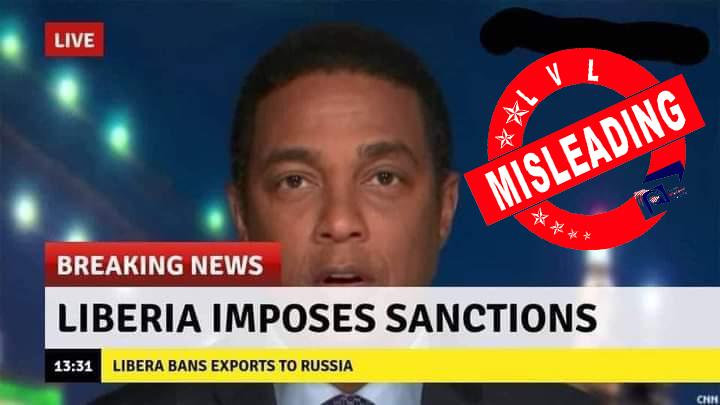 Monrovia – Since the invasion of Ukraine by Russia, Facebook users in Liberia have been expressing concerns about the danger that Ukrainians are caught-up in, but they have also been spreading some misinformation about the ongoing fighting.

Local Voices Liberia fact checking desk has seen an image circulating on Facebook with users claiming that it is a breaking news about the Liberian government’s stance against the Russian government.

These images continue to flood the internet as other world economic superpowers including the United States, UK, Germany, France, and several other European countries impose tough sanctions against Russia.

These social media posts claim that Liberia is imposing sanction on Russia. A certain viral image carrying a caption, “Liberia Imposes Sanctions” and “Libera bans exports to Russia” also carries a photo of CNN news anchor Don Lemon who appears to be reporting on the television.

So, we did a careful analysis of the photo by conducting a reverse image search to know if the image carrying the caption about Liberia’s sanctioning Russia is correct or incorrect.

A keen look at the image will identify few things and the first is that of the misspelling of “Liberia” in the yellow roll of the image. The creator of the image wrongly spells Liberia as “Libera”.

A further analysis of the image shows that in the upper right corner is the caption “breakyournews.com” – this is a website use to create images about trending news events and share to the internet. But some of these images might be misleading or incorrect.

What Has the Liberian Government Said 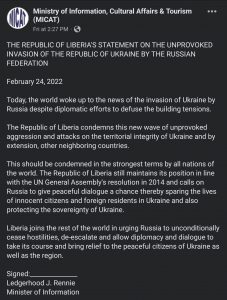 Meanwhile, we contacted the Ministry of Information to ascertain whether or not the government has placed any sanction on Russia or stop exports of its raw materials to Russia for its aggression against Ukraine. And a government spokesman said the government has not yet taken any decision of sort.

The only statement released by the Government of Liberia through the Ministry of Information on February 24, 2022, did not mention the imposition of sanction on Russia, even though it condemns the “unprovoked invasion of Ukraine by Russian Federation”.

The statement signed by the Minister of Information Ledgerhood J. Rennie reads:

Today, the world woke up to the news of the invasion of Ukraine by Russia despite diplomatic efforts to defuse the building tensions.

The Republic of Liberia condemns this new wave of unprovoked aggression and attacks on the territorial integrity of Ukraine and by extension, other neighboring countries.

This should be condemned in the strongest terms by all nations of the world. The Republic of Liberia still maintains its position in line with the UN General Assembly’s resolution in 2014 and calls on Russia to give peaceful dialogue a chance thereby sparing the lives of innocent citizens and foreign residents in Ukraine and also protecting the sovereignty of Ukraine.

Liberia joins the rest of the world in urging Russia to unconditionally cease hostilities, de-escalate and allow diplomacy and dialogue to take its course and bring relief to the peaceful citizens of Ukraine as well as the region.”

What is Break Your Own News?

The app used to create these kinds of images is known as Break your own news. It is a breaking news meme generator which gives users the opportunity to add any photo they wish to use, write any headline, and have the options of downloading the image, posting it on Facebook or other social media platforms.

Although it is a useful online tool, some people use it to misinform or disinform others by creating fake news to share as in the case of the one being share across social media in Liberia.

Based on our research, we conclude that the image carrying a caption that Liberia is to impose sanctions on Russia is incorrect. We also observed that some of those sharing this image did accompany it with jovial comments while others used jibes.

However, we cannot conclude that everyone sharing this image is aware that it is a meme or a joke, but the caption associated with these photos are fake.