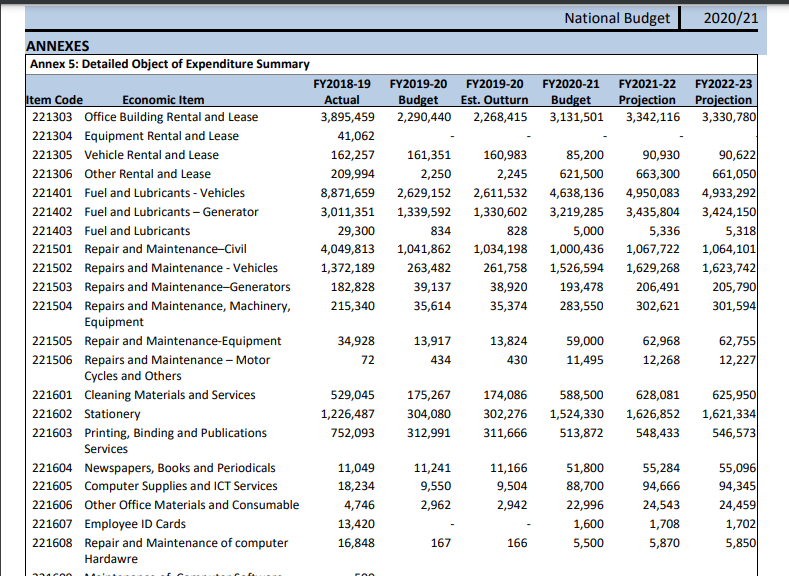 Paynesville – While appearing on a popular radio show on state broadcaster on March 2, Finance Minister Samuel D. Tweah made several comments about the state of Liberia’s economy including the government’s spending on fuel during the last fiscal year.

Minister Tweah emphasized the decline in government spending on fuel, disclosing that the government spent US$9 million on fuel in the last fiscal year.

When LVL checked the 2020/2021 fiscal budget, the portion of budget that captures the expenditure summary of goods and services shows that the total cost of fuel consumption allocation was US$7,862,411.

However, because Minister Tweah did not claim that the amount in the extended budget is considered part of the 2020/2021 fiscal year, we cannot conclude that the total allotment for fuel in the two budgets (2020/2021 fiscal budget and the 2021 extended special budget) was spent in 2021. This is because the 2020/2021 budget also covered expenditures in 2020.

Results of figure allocated for consumption of fuel in the 2020/2021 fiscal budget shows that the Government of Liberia allotted US$7,862,411 with an additional allotment of 4,795, 897 for fuel in the extended budget. However, because allotment is not the same as expenditure, it is also difficult to conclude that US$9 million was spent on fuel consumption as claimed by Minister Tweah.

On the other hand, if we consider the total amount allotted in the 2020/201 fiscal budget and the 2021 extended budget, which brings the figure to the total of US$12,658,308, we will also conclude that if US$9 million was spent as claimed by Minister Tweah in the 2020/2021 fiscal year then there was a surplus of US$3,658,308. This makes the claim by Minister Tweah that “US$9 million was spent on fuel consumption in the last (2020/2021 fiscal year” to be a bit ambiguous because the allotment in that fiscal budget is less than what the Minister claimed was expended. We also noted that budgetary allocation or allotment is not the same as expenditure – the allotment may be less, but the expenditure can be more or vice versa.

Fact Check: ‘Index of Economic Freedom’ is not a World Bank Survey as Claimed by Activist in Facebook Post
Fact Check: Online Article about Blood Clot in People Who Take J&J Vaccine is an Exaggeration of the Fact