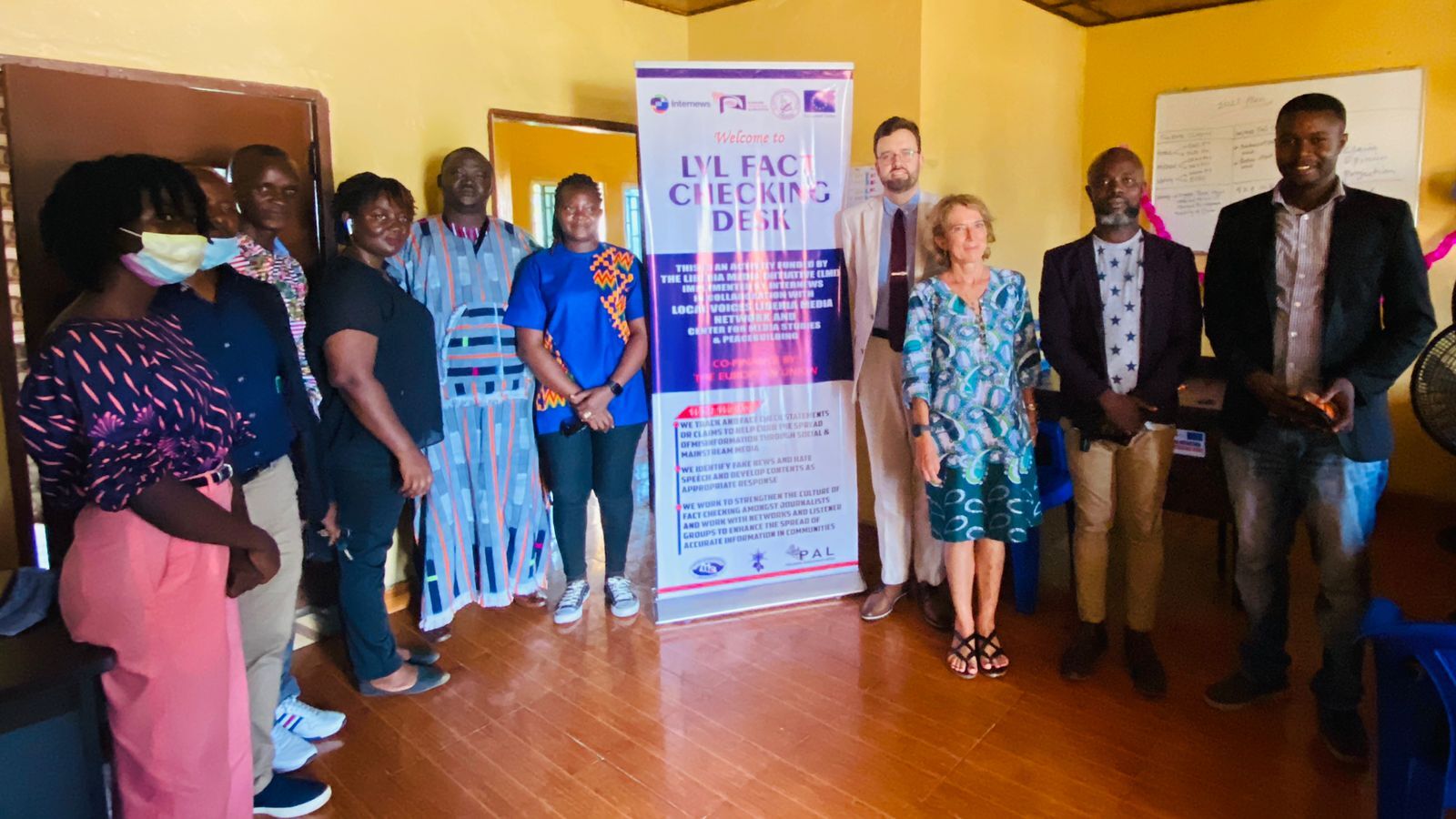 EU Delegation joined LVL staff and others at the official opening of LVL Fact checking Desk located in Paynesville on March 31, 2022

Monrovia – The Liberia Media Initiative has officially unveiled Liberia’s first fact checking desk in to counter and debunk the spread of fake news and misinformation within Liberia’s information ecosystem.

The fact checking desk, which is being run by Local Voices Liberia, is the first major fact checking initiative in the country and has been operating since June 2021 – tracking and fact checking variety of information or fake news that have been circulating in social and mainstream media.

With co-funding from the European Union, the fact checking desk is a major activity of the Liberia Media Initiative that is being implemented by Internews in collaboration with local partners like Local Voices Liberia (LVL), the Center for Media Studies and Peacebuilding (CEMPS), the Press Union of Liberia (PUL), and the Publishers Association of Liberia (PAL).

The launch of the fact checking project was graced by delegations from the European Union Mission in Liberia, the Independent Information Commission, officials of the Press Union of Liberia, media stakeholders, and journalists, amongst others.

Speaking at the program on Thursday, March 31, 2022, at a local hotel in Congo Town, Mr. Anders Arvidsson, who is the Head of Political, Press & Information at the EU Mission to Liberia, warned that “large-scale disinformation campaigns, online disinformation and misinformation are major challenges of our times”, adding that this looming problem “represents an attack to open societies and free democracies such as Liberia, Ukraine and the European Member States.”

He hailed the Liberian media including the LVL fact checking desk for working hard to counter the spread of fake news and misinformation in the country. 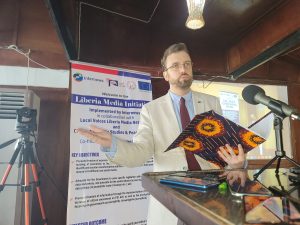 Mr. Arvidsson (above) was speaking at the launch of LVL Fcat Checking Desk at A’ La Lagoon in Congo Town on March 31 | Photo By: Alpha Daffae Senkpeni

“This will further institutionalize fact checking in journalism in Liberia and bring the information and facts closer to the Liberian people. My team in the EU Delegation and myself are proud to hear that both the newsletters and website have been steadily growing over the last months. More than 20 radio stations have been broadcasting the work done and the level of detailed and professional information and facts continue to surprise us”.

Speaking earlier, Mr. Samuka Konneh, LMI Project Director, thanked the EU for the support and described the project as a “huge success” while lauding LVL for effectively running the fact checking desk.

He stressed that the work of LVL has defied the myth that “Liberian organizations lack the motivation and professionalism to do great work”. 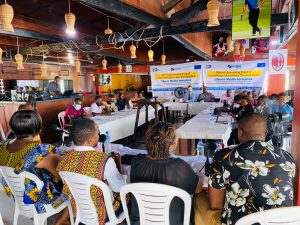 Members of the journalism community and a EU delegation attending program marking the official launch of the fact checking desk at A’ La Lagoon in Congo Town | Photo By: Mustapha Emile Kummeh

Meanwhile, the LMI Project Director also emphasized the significance of media development projects in Liberia, outlining the overall goals they seek to achieve including making interventions that leave a “long-lasting impact to enhance the country’s democracy”.

He added that measuring the achievements of the Liberia Media Initiative with its impact on countering fake news and other activities shows that the project is “an immense success”.

At the same time, he emphasized the challenge that journalists have to endure due to the frequent sharing of unverified information by non-media practitioners or citizen mainly via social media..

“That is the biggest problem that the media is facing in tis 21st century and I do strongly believe that with all of our different interventions under the LMI [project], we have begun a process that is more systematic, that is more deliberate, in combatting what has become to be known as fake news, misinformation, disinformation,” he said.

Konneh termed the launch of the fact checking desk as “a start of a significant process in combatting fake news” and urged the European Union to continue co-funding the initiative even after the end of the ongoing project especially in 2023 when Liberians will go to the polls in a very crucial national election.

“Our public is not sophisticated, our media still need training, fact checking is new in Liberia, so if we stop the effort at this stage (after the project) then we’ll be rolling back all of the gains we’ve made in systemizing the process of fact checking in the journalism we do,” he stressed.

Also, during the launch Local Voices Liberia presented a baseline activity report focusing on Liberians’ perception about fake news, hate speech and data privacy and protection. The survey, which was done using a Focus Group Discussion (FGDs) module, sought to gauge the public understanding about these topics, and informed LVL about how to effectively tackle the spread of fake news in Liberia’s information ecosystem.

“The nine counties are Bong, Nimba, Lofa, Montserrado, Bomi and Grand Cape Mount, Sinoe, Grand Bassa and Rivercess Counties,” he said. “These counties were divided into three regions based on their population size, levels of access to print, broadcast and social media usage.”

He added: “Participants showed significant level of understanding on this subject in the context of the frequency and prevalence of fake news and Hate speech. But respondents’ knowledge of ‘hate speech’ was slightly below that of fake news.”

Senkpeni added that the data of the FGDs has help his team understand the problem and developed strategy to track and produce contents to counter fake news and misinformation in the country.

As part of the fact checking desk operations, LVL produces fact checked reports that are published to a dedicated web page on its website, share and populated contents to social media (Facebook), produced a monthly newsletter, and produce a monthly radio program that is broadcast on 21 radio stations across the country.