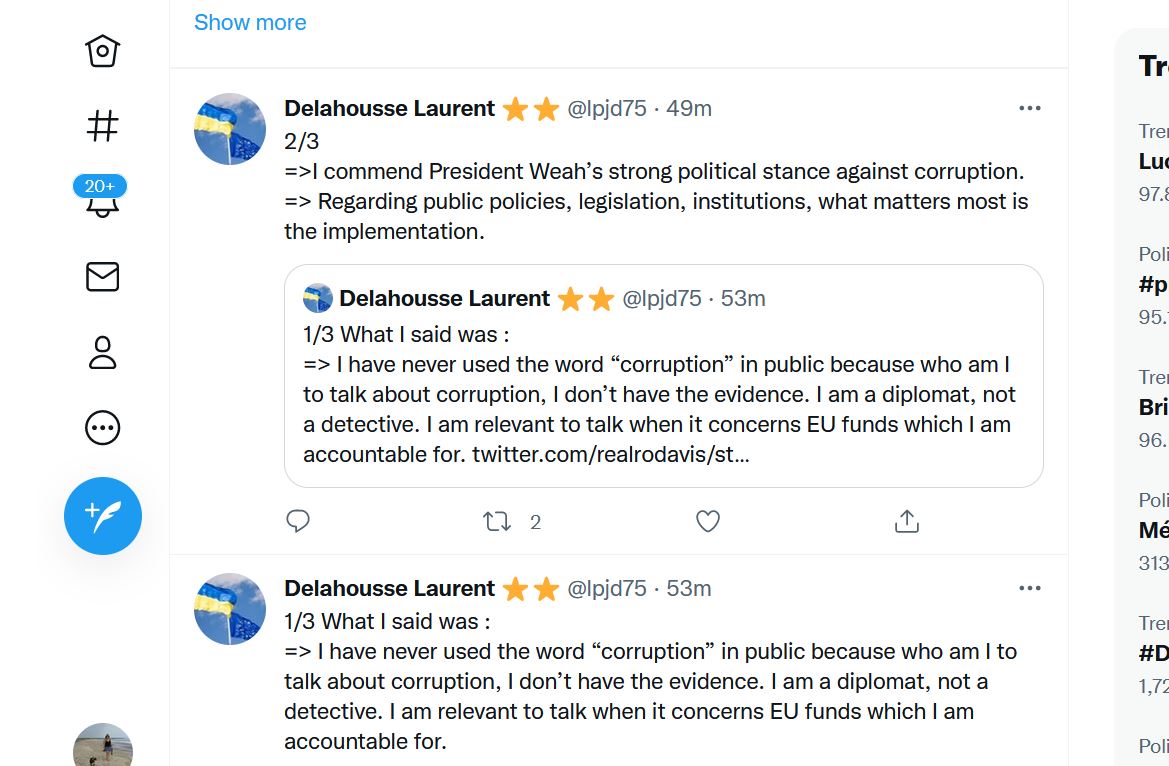 Monrovia – On Tuesday, April 12, The Analyst newspaper carried a story referencing a statement that it claimed was made by Laurent Delahousse — the European Union Ambassador to Liberia. The story carried the headline “No Evidence of Corruption in Liberia” – EU Ambassador rebuffs wide perception.

In the story, the newspaper stated: “European Union Ambassador Laurent Delahousse has opined that all the noise about corruption in Liberia under the Weah administration is not backed by evidence—at least not yet.”

The story also featured a direct quotation which it claims was made by the EU head of mission to Liberia: “What rights do Ambassadors or other diplomats have to accuse the Liberian government of corruption when we cannot prove any act of corruption, nor do we have anyone to identify as a corrupt person?”

The report also claims that the EU Ambassador made the statement at the Pro-Poor Agenda for Propensity and Development (PAPD) steering committee meeting held at the ministerial complex in Cong Town on Monday, April 11.

But an audio recording of the speech made by Ambassador Delahousse at the event obtained and transcribed by our Fact checking desk states as follow:

“If there is an issue for the relevant public of Liberia, for the solution of Liberia and us diplomats, your Excellency the priority and the push that the government of Liberia is doing on corruption. I like to say more because what’s your legitimatcy? Is it accountability and the pressing issues of the fund that comes from all country globally? Governments. Now accountability is measured through the various public procedures which the Ministry of Finance knows very well which they do every day; it is also measured through the cognitive force that comes after the implementation of projects. And I think that the political will to ensure transparency and accountability has to go a long way than before including looking at the recommendations available; ensuring that these recommendations are discussed and when they are rendered, they will be implemented specifically in bringing public officials to go just together with the rest of the team in issue of fishery and so that it is between the European Union and Liberia. I have not spoken publically about corruption because there has to be perceptional. Every use of the evidence precisely on what I’m talking about events have been notified that many were through NaFAA and these events call public followers and through public followers than will find a solution and we were discussing it last week in Brussels with the relevant authorities and I’m very optimistic provided that everybody does what they have to do.

“On developments priorities, I really hope for the possibility for the European Union to clarify something that might be happening in the last few weeks; my team and I we are actively focused on the promises of Liberia to discuss first the priorities that we supposed to implement in our support to Liberia but do not discuss with the various ministries –  with the Ministry of Finance, I think it is worth to have another opportunity to look into that through additional engagements.

“The second thing is about the way the European Union works, the way in which the European Union support Liberia. We operate in a way that we are moving away from the previous system of the European Development Bank; it has some consequences of a mega financial and political nature, but I can tell you, your Excellency, I can tell you Minister of Finance, that the determination of my team is to continue to work with all of Liberia in the way we have always done which is anyhow in transparency. EU accountability, mutual accountability; we have also come to convey that you are accountable, and we are accountable to our authority and the European taxpayers. I’m open to any member of the government of Liberia if the EU makes the time up here collectively or individually but thank you once again your Excellency for giving us the opportunity to be here. We have to exchange with good health a frank exchange; we have to exchange in truth, specifics what friends will do, they talk together even when there are things that are a bit tough, they are not afraid to share because they do together. Thank you again.”

Ambassador Dellhouse also provided a response to a certain tweet (a post on Twitter) made by Robert O. Davis. Mr. Davis was quoting Mr. Dellehouse: “All the noise about corruption under the Weah’s administration is not backed by evidence – at least not yet”.  – European Union Ambassador Laurent Delahouse.

But in a three-part tweet by the Ambassador on Tuesday, April 12 – a day after the event – he sought to correct the information in Mr. Davis’ tweet.

In the first tweet, Amb. Delahousse wrote: “What I said was: I have never used the word “corruption” in public because who am I to talk about corruption, I don’t have the evidence. I am a diplomat, not a detective. I am relevant to talk when it concerns EU funds which I am accountable for”.

He continued in the second tweet: “I commend President Weah’s strong political stance against corruption. Regarding public policies, legislation, institutions, what matters most is the implementation.”

And concluded in the third tweet: “And I add that integrity institutions must be able to do their job in full independence, without any interference”. The EU Mission also published a statement to their Facebook on April 12 clarifying what was said by the ambassador, stating:

“I have never used the word “corruption” in public because who am I to talk about corruption, I don’t have the evidence. I am a diplomat, not a detective. I am relevant to talk when it concerns EU funds which I am accountable for.

“I commend President Weah’s strong political stance against corruption. Regarding public policies, legislation, institutions, what matters most is the implementation. Recommendations made in audits and evaluations need to be carefully studied and implemented. Finally, integrity institutions must be able to do their job in full independence, without any interference.”