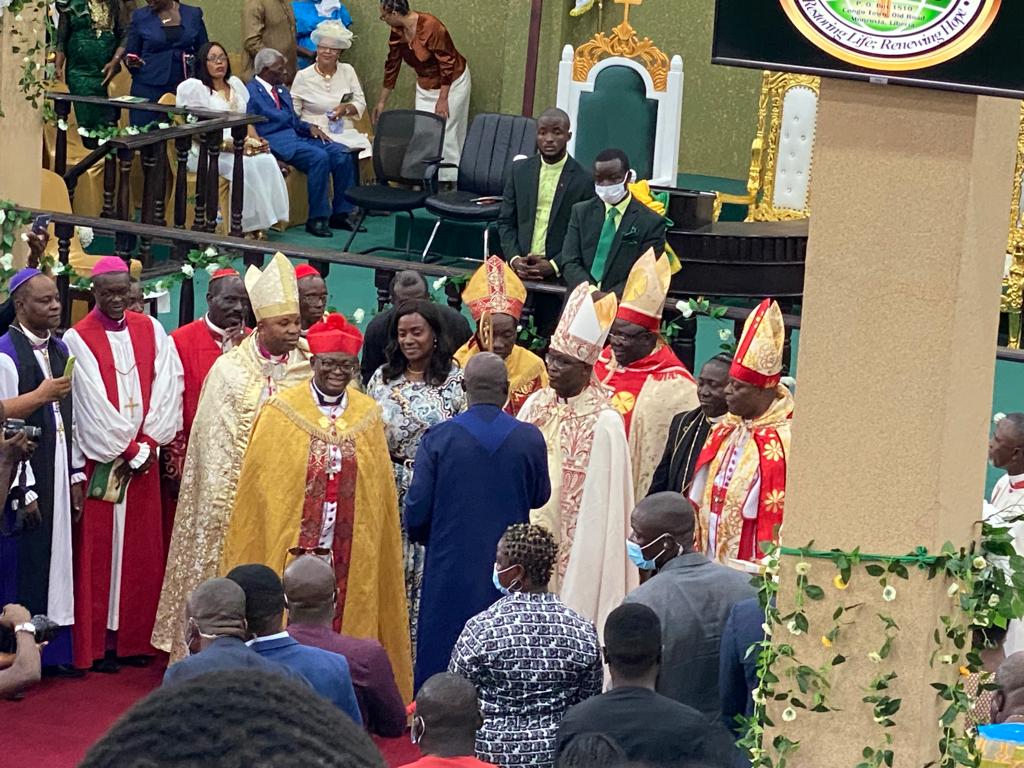 The ceremony was held at the Restoration Baptist Ministries on April 24, 2022, in Congo Town. And was attended by President Weah, his wife, and Vice President Jewel Howard Taylor.

Some Facebook users have lashed at the Baptist prelate for keeling before the President, contending that the Liberian leader is not qualified to perform a consecration rite to confer the tile of an Archbishop.

In several Facebook post, some users claimed that President Weah was allowed to be part of clergymen who coronated Bishop Johnson.

One Facebook user by the name of Farafina Mansa wrote: “The Liberian President Archbishop George Manneh Weah’s ordination of Pastor Gardea Joseph Johnson as Bishop was witnessed by the congregation while Mother Johnson knelt to Madam Clar Weah, First Lady of Liberia. Congratulations Bishop Gardea Joseph Johnson and Bravo to Archbishop George Manneh Weah for the ordination. Since 1847, none has achieved what you did today. God Bless Liberia”.

Meanwhile, Local Voices Liberia Fact Checking Desk has carefully reviewed the video footage of the coronation ceremony to authenticate the individuals that officiated the coronation of Bishop Johnson.

How the Coronation Happened?

In the video, the 13 bishops can be seen surrounding Rev. Johnson as one of them, Archbishop Jatau of the Faith Hill Prophetic Ministries headquartered in Niger, performs the consecration, ordination, and anointing of the clergyman. Rev. Johnson can be seen on his knees during the proceeding.

Archbishop Jatau then raised his voice and said: “I, therefore, pour this oil on you in the name of the Father, the Son and the Holy Spirit”. He then raised a bottle of the anointing oil and poured it on the head of the Rev. Johnson.

Was President Weah Part of the Coronation?

At the two hour and thirty-second minute (2:32) of the video, Bishop Jatau can be seen calling on President George Weah to present the newly ordained Bishop to the congregation of the Church.

President Weah presented a sword to the newly ordained Bishop and held his left hand, raised it three times, congratulated him and presented him to the rest of the church amid loud applause by the congregation.

During the coronation rite, President Weah, his wife, Madam Clar Weah and Vice President Jewel Howard Taylor were seated in the congregation. The footage shows that the President did not participate in the ordination and coronation of Bishop Johnson.

Based on a thorough review of the video footage of the ceremony by our fact checking desk, it was established that President George Weah was not part of the team of Bishops that performed the religious rite during the Coronation of Bishop Joseph Gardea Johnson.

Therefore, we conclude that the claim by some Facebook users that clergyman Johnson was ordained by President George Weah is misleading.