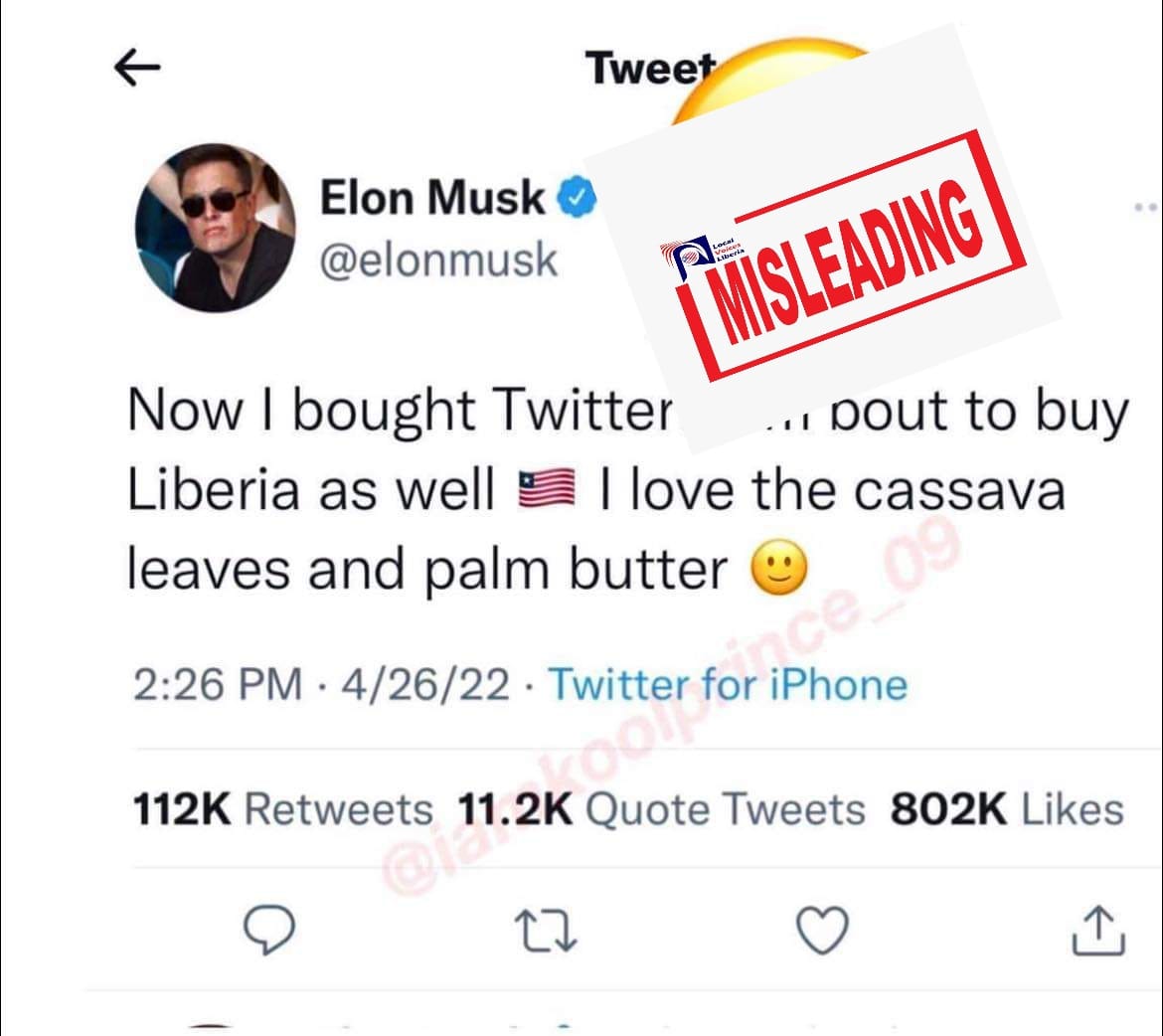 Monrovia – A screenshot of a purported tweet claiming to have been made by the world’s richest man Elon Musk is being spread on Facebook in Liberia. It claims that Mr. Musk is “bout to buy Liberia”. The tweet surfaced following his purchase of Twitter on April 25, 2022.

A screenshot of the purported tweet shows that it was made on April 26, 2022, at 2:26pm. It reads: “Now I bought Twitter. I’m bout to buy Liberia as well I love the cassava leaves and palm butter”.

This screenshot was also shared by Moriah Yeakula, a popular political figure and social media user in Liberia, on April 28. Her post generated dozens of comments made in jest about the topic of buying Liberia.

But did Mr. Musk make any tweet of sought? LVL checked and found that no such tweet was ever made by the world’s richest man about Liberia.

What did we Find?

A careful review of Musk’s official Twitter account since his US$44 billion takeover of the tech company shows that he made 24 tweets from April 25 to May 1 – this period includes the time the purported tweet was made. However, none of his tweets carried a message about buying Liberia as claimed in the screenshot making rounds on Facebook.

What Did Mr. Musk Say?

The attribution of false tweets to Mr. Musk since his acquisition of Twitter has prompted his subtle reaction. One tweet falsely attributed to Musk claimed that he was going to buy a popular fast-food company. The inscription on the false tweets attributed to his Twitter account reads: “Now I’m going to buy McDonald’s and fix all the ice cream machines”.

Mr. Musk has, in a subtle way, tried to refute false tweets attributed to him

But On April 28, 2022, Mr. Musk also shared a screenshot cautioning his followers. He tweeted: “Listen, I can’t do miracles ok”. The screenshot he tweeted about his purported plan to purchase McDonald was also never made by him.

Based on our review of the screenshot claiming that Elon Musk wants to buy Liberia and a careful search on Mr. Musk’s twitter account where we found no such tweet, we conclude that the tweet is false. It was likly created as a meme but may also be used to mislead users of Facebook.