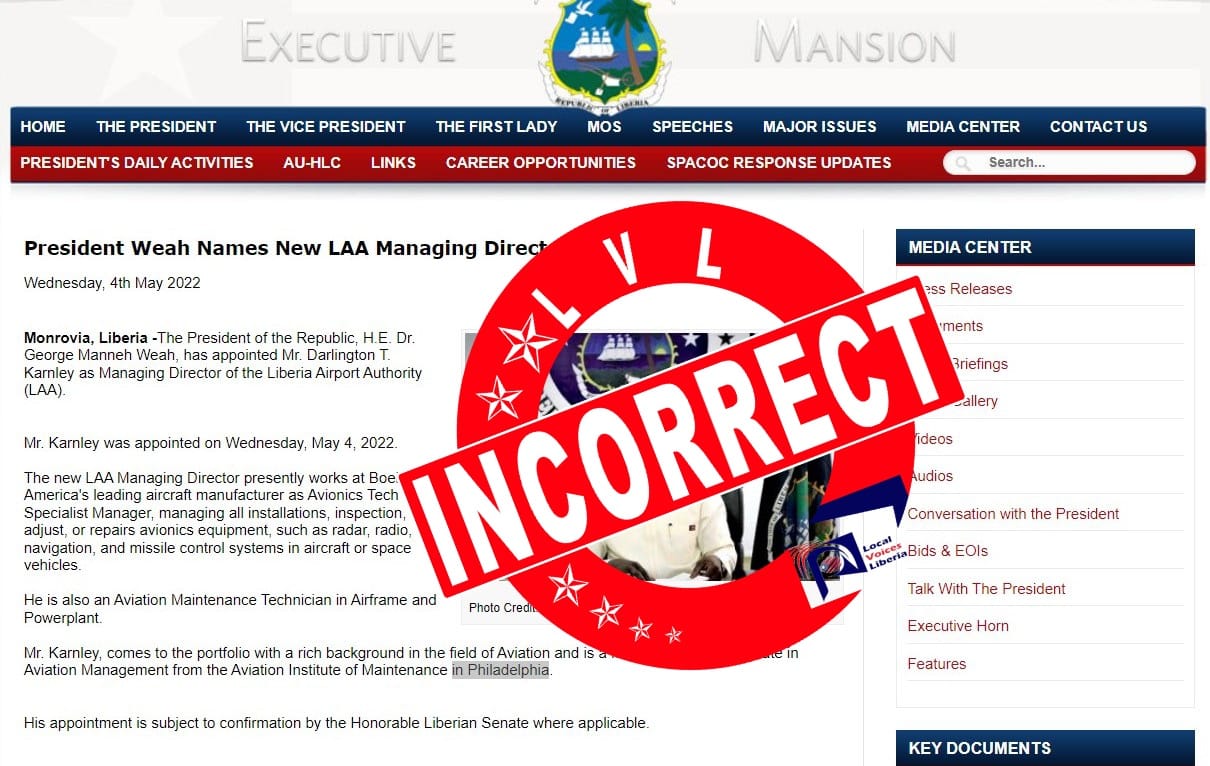 Monrovia – On Wednesday, May 4, 2022, President George Weah nominated Mr. Darlington T. Karnley as Managing Director of the Liberia Airport Authority (LAA). In a Press Release, the Executive Mansion stated that Mr. Karnley has “a rich background in the field of aviation and is a Master’s Degree Candidate in aviation management from the Aviation Institute of Maintenance in Philadelphia”.

Following the pronouncement, social media became flooded with variety of claims about Mr Karnley’s credentials. Some Facebook users claimed they were fake and refuted the information published by the Office of the President. Some criticized the President for appointing an individual, who they claimed, lacks the basic credentials to manage the country’s airports.

In one post by Liberian youth activist Martin K. N. Kollie, he wrote: “The credentials of Weah’s nominee for Airport Manager are FAKE. Darlington Karnley is a FRAUD. Aviation Institute of Maintenance (AIM) in Philly does not offer any degree. It’s a trade school like MVTC. Why GMW can’t check b4 [before] nominating”

Local Voices Liberia Fact Checking Desk carefully reviewed the website of the Philadelphia’s Campus  of AIM and found that the branch of AIM in that state does not offer any course in Aviation Management as claimed by the Executive Mansion.

According to the AIM website, it currently has 14 aviation maintenance schools that are accredited by the Accrediting Commission of Career Schools and Colleges (ACCSC) in 11 states across the United States of America. Below is a list of the various campuses:

When we checked, Mr. Karnley name did not appear on any list of employees at Boeing – the world’s leading aircraft manufacturer.

A search for Mr. Karnley’s name on the employee’s directory showed no result

Considering the position (Avionics Tech Specialist Manager) mentioned by the Executive Mansion that it claims Mr. Karnley occupies at the company is an essential staff position which the company labels as “key employees”.

But a review of Boeing’s key employees listing did not find Mr Karnlay’s name enlisted.

We also reviewed the Boeing Zoominfo Directory – where the names and titles of all the company’s current 93,558 employees are listed – but Karnley’s name was not found. Based on our research, we conclude that the claim made by activist Martin K.N Kollie and others that the credentials of President Weah’s nominee for Liberia Airports Authority Manager Director is fake is mostly correct. And that the Executive Mansion statement about Mr. Karnley’s credential is incorrect.

Mr. Karnley is not a master’s degree candidate in aviation management at the Aviation Institute of Maintenance in Philadelphia because the school does not offer bachelor’s or master’s degrees as claimed by the Executive Mansion.

We also conclude that the claim by the Executive Mansion that Mr. Karnley works as Avionics Tech Specialist Manager at Boeing is incorrect. Mr. Karnley’s name could not be found on the company’s employees’ directory.