Fact Check: No, Liberia is not the Dirtiest Country in the World 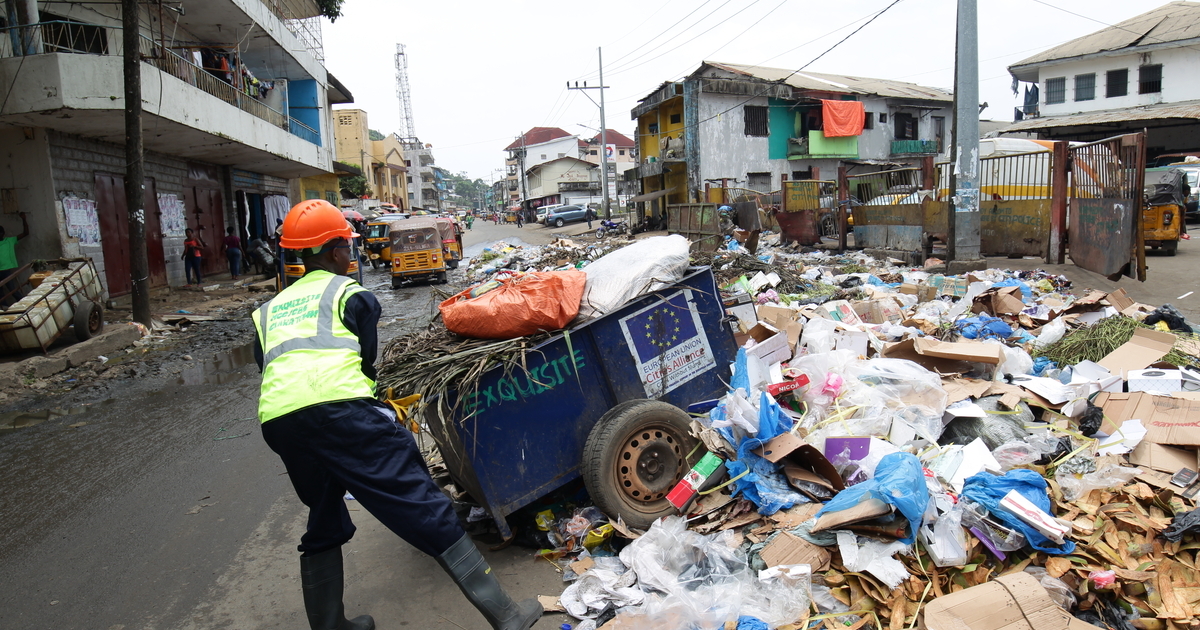 Monrovia — A short video containing information of some African countries’ environmental performances ranks Liberia’s the lowest amongst 180 countries. This video has been circulating social media platforms in Liberia.

The video cites the Environmental Performance Index (EPI) as its sources. It claims that Liberia has a score of 22.6 on the EPI, making the country the lowest performing amongst 180 countries.

Is the Video Credible?

Multiple reverse image search of the video conducted by LVL Fact Checking Desk found that it was first uploaded to a YouTube channel named Data is Statistic in October 2021. Details of the YouTube channel show that the channel was created by Opoku Ware Francis, a graduate of the University of Cape Coast in Ghana.

This YouTube channel has a long history of producing and uploading videos that rank African countries on different topics.

But an analysis of the video that ranks Liberia the lowest on the EPI, shows that the voice narration in the video does not match the mechanics of the texts that appear in the video. Our analysis also found that the video producer used Artificial Intelligence (AI) – a stimulation of human intelligence performed by computer – to do the narration or voicing.

However, the information the video coveys is based on the 2020 Environmental Performance Index  which uses 32 indicators covering 11 issue-based categories to rank the environmental performance of 180 countries.

EPI is a joint project of the Yale Center for Environmental Law and Policy and The Center for International Earth Science and Information Network (CIESIN) at Columbia University’s Earth Institute. EPI gets its funding from  McCall MacBain Foundation of Canada.

The 2020 report captures “data [that] came from trusted third-party sources like international governing bodies, nongovernmental organizations, and academic research centers.” Although it was released in 2020, the report covers environmental events or incidents in 2017 or 2018.

The 2020 EPI performance explanation states that a low EPI score indicates the need for greater attention to the spectrum of sustainability requirements, with a high-priority focus on critical issues such as air and water quality, biodiversity, and climate change. The EPI ranks countries on environmental health and ecosystem vitality.

Does the Report Rank Liberia the Direst in the World?

While the video goes viral on social media, Liberian politician Alexander Cummings has also cited the same EPI data in the video to make a claim on Facebook about Liberia’s environmental situation.

Part of Mr. Cummings’ post on Facebook, which was done on May 13, 2022, reads: “…Finally, under President Weah, already regarded as amongst the most corrupt and poorest in the world, Liberia has again been named the “dirtiest country in Africa”. According to the Environmental Perception Index (EPI), Liberia ranks 182 out of 182 countries in the world for being the dirtiest.” 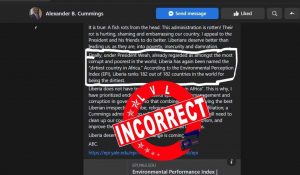 But did Mr. Cummings get his facts right? We also checked.

A review of the 2020 EPI report shows that Liberia is the lowest ranked country (180th) based on the cumulative score of 22.6 – the tally of all the scores Liberia obtained in the 11 categories that the index covers.

However, it is important to note that Liberia is ranked 160th out of 180 countries in the waste management category. This category looks at the “new Waste Management metric [that] tracks the final destination of waste materials as a measure of the waste’s direct impact on the environment”. 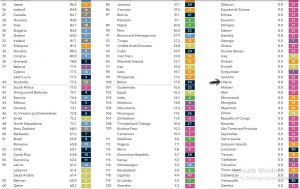 It is also important to note that the data collected to determine the scorecard for the waste management category was collected either in 2017 or 2018.

How is Liberia Ranked in the other 10 categories?

For the ecosystem services category, Liberia is ranked 169th out of 180 countries, and ranked 153rd in the Biodiversity and Habitat category.

Also, in the agriculture category, Liberia is ranked 136th; for the water resources category at 159th and 94th in the Fisheries category.

Based on our research, we conclude that Liberia’s total EPI score is indeed 22.6 – the lowest of the 180 countries the report covers. We also found out that Liberia is ranked 160th out of 180 countries in the Waste Management category – amongst the least performing in Africa. However, Liberia is not the lowest ranked in the waste management category, according to the EPI scorecard. There are 20 other countries below Liberia in this category amongst them, seven African countries.

Based on our careful review of the EPI scorecard, we conclude that the video circulating on Facebook that Liberia is the direst country in Africa is misleading because the video cites the cumulative score of Liberia on the EPI and not the country’s specific ranking in the waste management category.

Also, we conclude that Mr. Alexander Cummings assertion that Liberia is the dirtiest country in the world is incorrect. As stated above, Liberia is ranked 160th out of 180 countries in the category of waste management on the EPI scorecard – above 20 other countries.

Considering that waste management, as defined by the EPI, is the control of solid waste based on “the percentage of household and commercial waste (not toxic materials) generated in a country that is collected and treated in a manner that controls environmental risks”, we conclude that a country is ranked dirty when it performs poorly in the waste management category of the EPI.

Therefore, because Liberia is160th out of 180 countries on the waste management scorecard, Liberia is not the direst country in the world as claimed by Mr. Cummings.

However, it is important to note that the date relied on to determine the EPI 2020 scorecard was collected either in 2017 or 2018. There is no new scorecard released by the EPI.