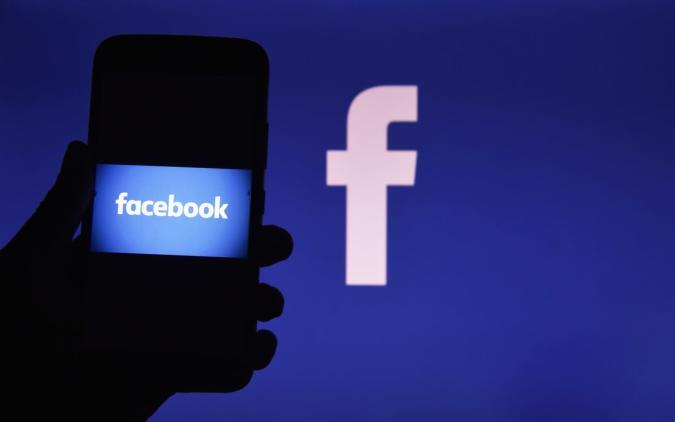 Monrovia – As the world continues to witness the advancement and development of digital or social media platforms, cyber criminals are also stepping up their game. These cybercriminals continue to upgrade their skills. But the impact of their unscrupulous skills is becoming alarming and problematic for internet users.

According to the 2022 first quarter report of Meta, the company that owns Facebook, Messenger and WhatsApp, Facebook monthly active users is estimated at 2.94 billion as of March 31, 2022 —  an increase of 3% from the previous year. But Facebook continues to have major issues with fake accounts. Many fake Facebook accounts are created to either promote malicious contents or to defraud other people, etc.

While a genuine Facebook user shares daily activities or thoughts about random topics or trending issues, a fake profile may usually share posts about one thing that the user keen on promote or defaming. And if you just look carefully at the profile, you can tell whether that profile is fake or genuine.

With the help of articles published by MalwareFox or Ignite Visibility we have put together six basic steps to help you detect a fake Facebook account or profile.

If you see only a single profile photo and the account is new or more than a year old or the account’s profile picture is a photo of a celebrity, it is a clue that you need to be careful.

Step 2:  Read the About Section

Another way to spot a fake Facebook account is to look at the “About” Section of the account. In most cases, genuine Facebook users would list some accomplishments including adequately listing name of school, college, current and previous employment or other specific information about their career or personal life.

But if you do not see anything on the “About” section of a Facebook account, this should be a clue to make you even more suspicious about this kind of account.

Additionally, creators of fake accounts or profiles don’t go into details; they use common, famous people and places to make the account look real; so be mindful if you see lines like: “Works in New York”; “Went to New York University” and “Lives in New York” on their profile. 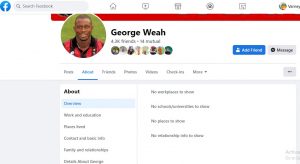 A screen shot of the fake profile of President George Weah.

It obvious that a genuine Facebook user or profile would connect with more local persons in the country or city the claims to be from or living. However, an account with so many foreign friends and very minimum or no local friends should awaken your doubt that the account might be a fake one.

If a person is claiming to be a Liberian, why would they connect with so many Lebanese or Indians but few or no Liberian as Facebook friends? This is another clue.

Step 4: Different Name in the URL and the Profile

Many fake accounts have different name in the URL (the link to the Facebook account) from what is on the profile. This usually happens when a genuine person account is hacked and then operated under another person’s name or when the account was initially created for some other activity but then the name was changed to promote different topic or cause.

For example, a Facebook account claiming to be former President Liberian President Ellen Johnson-Sirleaf has a different name in the URL and a different profile name. 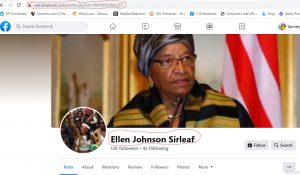 A screenshot of the fake Facebook account of former President Ellen Johnson-Sirleaf. The URL is different from the Profile name.

If a Facebook user or profile is posting too many links of one or many websites with lots of ads, than it’s clear that the account is for promotion and likely to be a fake one.

Step 6: Lack of Interaction on the Posts

To spot this you will have to check the profile of the account carefully, click on the pictures and check the likes and comments. When you see so many likes, and generic comments on pictures of an account like beautiful, cute, and sweet, but the account holder does not reply to any comment then it might be a sign of a fake profile. A genuine person at least will appreciate someone’s compliments.

Another thing to consider is to click on the “More” button on the Profile to see the activities of the person like Check-ins, Music, Films, or TV-Program. If you see no such activity, then the profile might most likely be not genuine.

There are lots of ways to identify a fake Facebook account; however, none of them are definitive proof that the account is actually a fake one. Note that maybe someone doesn’t willingly display his/her original picture or lists his or her personal information in the About section because of privacy concern. It usually happens with old age persons who do not like to share everything on Facebook.

However, being suspicious of accounts or profiles that have elements of the clues mentioned in all the steps above will avert any potential cyber harm you might face. It is advisable to always follow these steps to verify accounts that you interact with on Facebook.

Anthrax Virus: What You Need to Know
Explainer: Things you need to know about Monkeypox virus