Misleading: Central Bank of Liberia Is Not Minting $25 and $30 Coins

Paynesville — In the last few weeks, dozens of social and mainstream media platforms have claimed that the Central Bank of Liberia has minted a new species of coins in L$30 and L$25 denominations.

On August 11,  a popular Liberian social media influencer, Varney A. Teah known as Strong Gbana Pekin on Facebook made a post indicating that the CBL has minted new coins in L$25 and $30. The post generated 260 comments, 283 reactions and 13 shares.

Also, the Liberia Public Radio made this on Facebook: “New Liberian coins to hit the market soon. The central Bank of Liberia says all is now set to reintroduce coins on the Liberian market beginning September 2022”.

These posts and images have sparked a major online and offline debate about the significance of making bigger denominations in coins as some criticize the CBL.

But are these posts displaying new coins correct? LVL Fact Checking Desk monitored the various claims and have done verification.

First, we used a credible online tool for image verification to authenticate whether the photos making rounds on social media are actually the new Liberian coins.

A reverse image search using Google Image and Yandex revealed that the images of coins used in these Facebook posts were copied from an online platform named Numista – where non-circulating coins from different countries are displayed.

It is a website where people learn about coins and banknotes through the collaborative catalogue covering all countries and all periods. A catalogue of non-circulating Liberian coins is also displayed on the website where the photos of the purported L$30 and L$25 coins making the rounds on social media can also be found.

However, the image of the L$25 coin that has gone viral on social media was created in back 2005 by the site to commemorate the election of now retired Catholic Pope Benedict XVI – head of the Catholic Church and sovereign of the Vatican City state.

On one side of the image (coin), is the seal of Liberia and the other side has a portrait of Pope Benedict XVI standing in front the St. Peter’s Basilica. We also observed that the viral image on social media didn’t display the two sides as seen on the website. 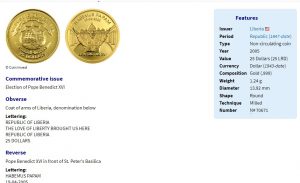 Second, in additional to the verification of the image using reverse image search, we also view a published statement from the Ministry of Information debunking claims about the purported coins, saying that the CBL is “only minting coins in L$5 and L$10 contrary to speculations that it is minting L$30 and L$25”.

The Government insisted that the decision to mint these denominations is consistent with the May 6, 2021’s Joint Resolution of the National Legislature authorizing the Central Bank of Liberia (CBL) to print and mint the new family of Liberian currency totaling L$48.734 billion.

Third, we contacted the Director of Communications of the CBL, Mr. Cyrus Badio, via WhatsApp who also refuted claims that $25 and $30 Liberian dollar coins are being minted by the government.

“The news trending on social media regarding the printing of coins by the CBL in the denominations of $25 and $30 is fabricated and far from the truth,” he said, continuing,  “Here are the facts: the CBL is only minting coins in L$5 and L$10. Delivery of the coins will begin in the 4th quarter of 2022 and infused into the economy through the commercial banks.”

Based on the outcome of the reverse image search, the official statement by the government through the Ministry of Information and the response for the CBL Director of Communications, we conclude that the social media posts claiming that $30 and $25 Liberian dollar coins have been minted is misleading.

The photos of the coins were copied from an online platform where non-circulating coins from different countries are displayed. These images are unrelated to the coins being minted by the CBL.