Explained: What is the Global Magnitsky Act? Who Can Get Designated. 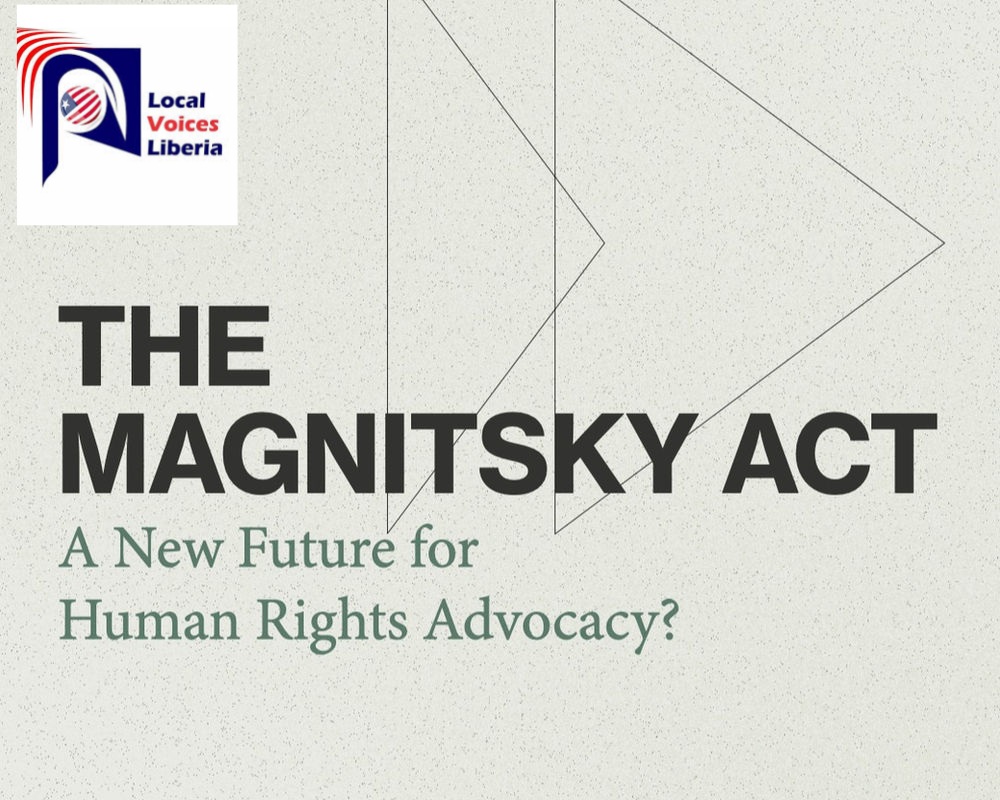 Paynesville – The Global Magnitsky Human Rights and Accountability Act was enacted into law in December 2016 and authorizes the President of the United States to impose economic sanctions and deny entry into the United States foreign individuals or entities engaging in human rights violations or corruption.

The Act is based, in part, on a 2012 law passed by the US Congress titled the “Sergei Magnitsky Act” which require the President to identify and impose sanctions on any person determined to have been involved in the detention, abuse, or death of Mr. Magnitsky; the ensuing cover-up; or the alleged criminal conspiracy that Mr. Magnitsky had uncovered.

Sergei Magnitsky was a Russian tax lawyer and auditor in Russia who documented expropriation of assets owned by Hermitage Capital – once the largest foreign investment brokerage in Russia which acquired through rampant Russian government’s corruption. Magnitsky was arrested by the Russian government in November 2008 for allegedly committing tax evasion. He later died in prison in November 2009.

More broadly, the law requires the US President to identify any person determined to be responsible for gross violations of human rights against individuals either seeking to expose illegal activity by officials of the Russian government or to “obtain, exercise, defend, or promote internationally recognized human rights and freedoms” within Russia.

How is the Act Enforced?

The Act gives the US President the power, which he delegates to the Secretary of Treasury, in consultation with the Secretary of State and the Attorney General, to administer and enforce economic and trade sanctions based on US foreign policy and national security goals against targeted foreign countries and regimes.

They also include terrorists, international narcotics traffickers, those engaged in activities related to the proliferation of weapons of mass destruction, and other threats to the national security, foreign policy, or economy of the United​ States.

Why a Person/Institution May Be Designated?

Once the President of the United States (now delegated to the Secretary of Treasury, in consultation with the Secretary of State and the Attorney General) identifies a person or institution to be “responsible for extrajudicial killings, torture, or other gross violations of internationally recognized human rights against an individual in any foreign country, who seeks to expose illegal activity carried out by government officials or obtain, exercise, defend, or promote internationally recognized human rights and freedoms, such as the freedoms of religion, expression, association, and assembly, and the rights to fair trial and democratic elections,” the person is then consider for designation (sanction).

With regards to corruption, the President may impose sanctions on any foreign government official, or any senior associate of such official “responsible for, or complicit in, ordering, controlling, or otherwise directing, acts of significant corruption, including the expropriation of private or public assets for personal gain, corruption related to government contracts or the extraction of natural resources, bribery, or the facilitation or transfer of the proceeds of corruption to foreign jurisdictions.”

Additionally, the US Treasury Department may designate any foreign person who has “materially assisted, sponsored, or provided financial, material, or technological support for, or goods or services in support of” such acts.

If a person is considered to have committed any of the above violations or abuses, the Department of Treasury will then issue a press release noting each new economic sanctions designation and includes a description of the reason for the designation.

The Act authorizes two types of restrictions for designated officials: first, economic sanctions (asset blocking and prohibitions on transactions), freezing any property held within U.S. jurisdiction and prohibiting U.S. individuals or entities from entering transactions with the designated person. Second, visa restrictions – denying entry into the United States and revoking any already-issued visas.

How Can Designation be Terminated?

However, the Act authorizes the President to terminate sanctions if he/she determines that the designee did not engage in the activity for which sanctions were imposed; that the person has been prosecuted appropriately for the activity; has significantly changed his or her behavior or “paid an appropriate consequence,” and credibly committed not to engage in future sanctionable activity; or the US Government decides to terminate the sanction in the interest of its national security.

Based on one of the above factors, the President will then report to US congressional committees and informed them that “credible information exists” for the sanction to be lifted not later than 15 days before the termination of the sanction.

Explainer: Things you need to know about Monkeypox virus